Sneaky supermarket tricks and thinking behind them

Pricewatch: ‘Once we are occupied in their shops, they don’t make it easy for us to leave’ 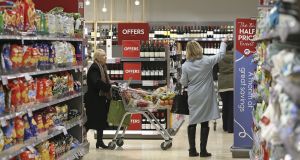 Supermarkets keep the things you are most likely to put into your shopping trolley as far apart as possible so you have to traverse the shop to get them. Photographer: Simon Dawson/Bloomberg via Getty Images

Supermarkets might style themselves as your friends, but really they just want to part you with your money and will deploy all sorts of tricks to do so. Here are just some of them.

1 Have you ever wandered into a supermarket, not been able to find what you wanted – or decided you didn’t want anything – and then tried to leave only to find your progress impeded by an entrance door that only opened in?

Meanwhile all the checkout lanes not being used were blocked off and marked with stern “No exit” signs, which meant the only way out was through an open checkout lan. So you had to either buy something and queue or barge past others in the queue.

It is all part of the shop’s cunning plan to get you to spend. Once we are in their shops, they don’t make it easy for us to leave. They might try and claim it is to make life harder for shoplifters, but we know their game.

2 Once you are in a supermarket, you will first encounter fruit, vegetables, bread and flowers; this is by design. Retailers know that the bright colours of produce and flowers will improve our form – and that we spend more when we are in better form.

They also know that the sight and smell of fresh food and bread will make us hungry so we will put more into our trolleys. And they know that because we feel better about ourselves for stocking up on healthy stuff early in the shop we will feel less bad when we put more junk food into the trolley later in the visit.

3 Last week a fan of the Hula Hoops-style snacks sold by Aldi made headlines in the UK after he opened a multipack of Snackrite Hoops only to find the big bag contained little bags of Hula Hoops.

KP Snacks, which makes the latter, was contacted and confirmed it also made the former. It was clearly a quiet news day across the water. But the story points to one of the retail trade’s biggest secrets: that most own-brand products are made by well-known brands and are virtually identical save for the price.

All the big bread, dairy and meat companies in Ireland make products sold under well-known brand names and under own-brand label, as do the big confectioners and makers of cleaning products. Two notable exceptions are Kellogg’s and Coca Cola, which make a virtue of not producing anything for anyone else.

4 Have you ever noticed how far apart all the grocery staples are? Supermarkets keep the things you are most likely to put into your shopping trolley – meats, vegetables, bread, milk, butter, cereals and cleaning products – as far apart as possible so you have to traverse the shop to get them. That leaves you open to temptation.

5 Retailers almost always make eggs hard to find. They know you will keep looking until you find them and they hope you will stumble across other things you did not know you needed while the egg hunt goes on.

6 There are two reasons why dairy products are at the back of a shop, one good and one sneaky. Loading bays are usually at the back of a big shop, so by putting dairy close to there it means it has to travel shorter distances between trucks and refrigerators.

The second reason is that milk and butter are “destination items”, the products people actually go into shops for. When they are at the back of the shop, we have no choice but to walk past things we might buy on impulse.

7 The smell of freshly baking bread coming through the air-conditioning system in your local shop is old hat. The laboratory-created smells that burst from the actual products when you open them is perhaps newer and more insidious.

Boffins can make instant coffee smell like a barista’s convention when a jar is just opened. But the fragrance is fleeting and fake and sure as anything the coffee will smell like powdered clay a day later.

8 It’s a bad idea to shop on an empty stomach. A hungry shopper is a stupid shopper. US research has proved that when we are hungry we subconsciously buy higher-calorie food. And we also put more food in our trolleys. So if you have not eaten and are heading to the shops buy a bar of chocolate before you walk through the doors. It will help your wallet and your waistline in the long run.

9 We are predictable. So predictable, in fact, that we almost always reach for products when they are placed at eye level on our supermarket shelves. By mad coincidence, that is where the most expensive products are.

There is a real chicken-and-egg thing happening here. Supermarkets charge suppliers more for the best positions and they pass that on to shoppers. So we end up paying a premium for positioning. If you were to do all your shopping from the top and bottom shelves, you’d probably save yourself a fortune. The only time premium products are found lower than an adult’s eye level is when they are aimed at a more youthful market.

10 There is a reason the conveyor belts at the tills are getting longer. Pay attention to how long they are next time you are in an Aldi or a Lidl. And the reason is because we believe our queuing is at an end when we start loading our stuff on to the belt, even if the shopping of four other people is sitting in mountains ahead of us on the same belt.

11 And speaking of tills, there is a reason the little corridors supermarkets funnel us through are always so narrow and so devoid of shelf space. Retailers don’t want to make it easy for us to discard things we decide, on mature recollection, we don’t need as we wait in line.

But if we can’t find anywhere to dump the six pack of lager we put in the trolley three minutes earlier, chances are we will just end up buying it.

12 See the way supermarket trolleys are getting bigger and bigger? There is a science to that. Nefarious research has shown that when trolleys are bigger we put more stuff in them.

The research has numbers – when retailers increase the size of their shopping trolleys by 100 per cent, people buy 20 per cent more. Another secret supermarkets would probably rather you did not know is that trolleys are almost never cleaned.

If a six-pack of a fizzy drink becomes a 12-pack people will drink considerably more of it. And speaking of bulk buying, shoppers who notice two-for deals buy anywhere between 30 and 100 per cent more than they planned to.

14 Many supermarkets have got rid of the sweets at the checkouts and dressed it up as a consumer-friendly move aimed at reducing pester power from children. But they have been replaced by other things including glossy magazines and gadgets – the stuff you don’t need but might buy because you are bored with queueing.

15 The reason the treat – and the booze – aisles are near the end of the route the supermarket wants you to take is because by then you’re frazzled and bored by the shopping so more inclined to make bad decisions.

The best way to combat this – and many of their other tricks – is to reverse the direction of your shop. So start with an empty trolley at the booze and treat aisle and finish at the fruit and vegetables. You’ll be surprised at the difference it makes. You might also be a bit freaked out.