Elderly US veterans begin walk from Dún Laoghaire to Border 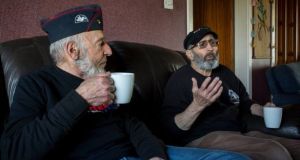 Anti-war protesters Ken Mayers (right), retired US marine, and Tarak Kauff, retired from the US army, after being released from jail in Limerick earlier this year. Photograph: Alan Place

US Veterans For Peace members Ken Mayers and Tarak Kauff began a walk from Dún Laoghaire to the Border with Northern Ireland on Monday.

The two, who were detained for 13 days at Limerick Prison in March, have been accused of engaging in a security breach at Shannon Airport on St Patrick’s Day, causing criminal damage to the airport’s perimeter fence, as well as unlawfully trespassing into a taxiway.

They were granted bail of €2,500 at their court appearance but had to surrender their passports, which meant they could not return to the US. They are still awaiting trial in Ireland.

They started their “Boots on the Ground For Freedom” walk from Limerick Prison on September 7th, and invited like-minded people to join them “in demanding real Irish neutrality and saying no to war”.

They started what they call “phase two of Boots on the Ground for Freedom Walk” from Dún Laoghaire at 11am on Monday. The two walked to the Dáil, where they had previously met and been photographed with a number of TDs on the introduction of Dún Laoghaire TD Richard Boyd Barrett.

They returned to Dún Laoghaire on Monday night for a party in the upstairs bar in McLoughlins, of George’s Street. The walk is set to resume on Tuesday morning.

Veterans For Peace works to publicise the cost and the causes of war, and is a global organisation of military veterans and allies aiming to build a culture of peace.

Speaking earlier this year, Mr Kauff (78), a former US army paratrooper and Mr Mayers (82), a former US Marine Corps Major, said they had come to Ireland to protest against the US military’s use of Shannon Airport.

It is understood they were part of a six-strong group from the United States. They said they came to Ireland “to be part of the resistance to that and it turned out, the day we were in Limerick, St Patrick’s Day, we found out a plane had landed at Shannon”.

The route of the current Boots on the Ground march will take the men from Dún Laoghaire to the Border near Dundalk, with starting points and ending points planned for train stations to facilitate a return journey to Connolly station each evening, if hosting or driving support have not been arranged.

They have appealed for drivers to help between Drogheda and Dundalk as northbound trains and Dart stations are not available, so hosts and drivers will be needed to support this section to Dundalk.

As they are awaiting trial and have no passports, they can not cross into Northern Ireland.