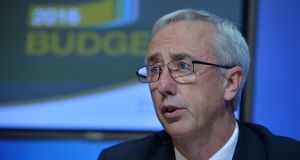 Eight Dublin households received unexpected letters on Friday informing them their homes could be demolished as part of plans for a MetroLink station in the city.

Residents of duplex buildings on Townsend Street were not informed of their potential fate when updated plans for the MetroLink rail project were unveiled earlier this week.

Unlike the neighbouring College Gate apartment complex, whose residents have known for some time they may be subject to compulsory purchase orders, those in Townsend Street had no expectation they would be affected. “Unfortunately this work will also impact on your building,” they were told in the letter.

He said: “This [project] consultation has been going on for a year now and the community are only finding out now that their houses are going to be demolished.”

It is understood officials from the National Transport Authority and Dublin City Council, the owner of the duplex buildings, will meet residents soon to discuss their future.