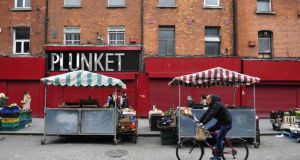 The Moore Street buildings, the scene of the last acts of the Easter Rising, were declared a national monument in 2007 but have been derelict for years. Photograph: Aidan Crawley 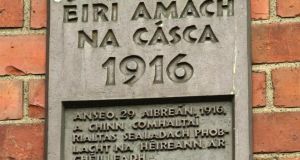 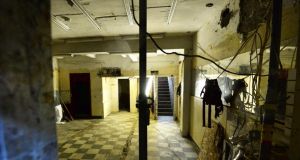 Inside 16 Moore Street, which has been derelict for years. Photograph: Cyril Byrne

The Moore Street site which was the last place where the rebels held out during the Easter Rising is to be bought by the State for €4 million.

The Cabinet has agreed to a proposal from the Minister for Arts, Heritage and the Gaeltacht Heather Humphreys to purchase the site at 14 to 17 Moore Street from Nama.

No 16 Moore Street was the location where the decision was taken to surrender on Saturday April 29th, 1916.

The site was declared a national monument in 2007, but has been derelict for years .

The four houses will be restored and turned into a commemorative centre as one of the main projects associated with the centenary of the Rising.

The commemoration programme will include an exhibition of 1916 material which will open at the National Museum.

The National Library is developing a major online resource which will include thousands of letters and artefacts from the seven signatories and others.

A renewed emphasis will be put on the women involved in the Rising.

“Never again will we airbrush out the significant contribution of the women who helped us achieve our freedom,” Ms Humphreys wrote in an opinion piece in Tuesday’s Irish Times.

Among those to be honoured will be Margaret Skinnider, who was shot and injured during the Rising, and nurse Elizabeth O’Farrell, who accompanied Patrick Pearse when he surrendered.

The Minister stated that as a “Protestant and an Ulsterwoman who is a proud Irish republican, I appreciate the need to respect the differing traditions on this island”.

She said Ireland is a more mature country than it was in 1966 when the 50th anniversary of the Rising was commemorated.

“Over the past 100 years we have, I believe, grown as a nation that values and embraces our differences as a positive symbol of diversity rather than a negative source of division. In 2016 we should not be afraid to celebrate how far we have come and to challenge ourselves to consider what we want for this Republic in the future.”

The programme will include an educational dimension. Schoolchildren will be asked to reflect on the meaning of the Proclamation and its ideals. They will also be asked to reconnect with the national flag and its meaning of uniting Catholics and Protestants.

While Taoiseach Enda Kenny earlier said a new proclamation will be drafted for the 1916 centenary celebrations, a Government spokesman later clarified Mr Kenny’s remarks, saying a new collection of proclamations “inspired” by the original will be written by schoolchildren.

Speaking at a press conference to mark a Fine Gael small business initiative, Mr Kenny initially said a new proclamation will be drafted as part of a “a comprehensive, inclusive, broad-ranging set of commemorative events in respect of 2016”.

“So what we want to do out of the series of commemorative events is, right across the country, to engage our people – young and not so young – both in the reflections on the proclamation, on the drafting of a new proclamation, a whole series of issues in the Irish language, in culture and music and literature, involving the iconic sites in Dublin and involving everyone at home and abroad,” Mr Kenny said.

However, the spokesman said schoolchildren will write their own proclamations “based on and inspired by the existing proclamations with a view to reimagining Ireland”.

Minister of State Aodhán Ó Ríordáin has already floated the idea of children writing their own proclamations as part of the 1916 centenary year.

1 Des Bishop apologises to Traveller community for comments in interview
2 One hundred Irish retailers for all your online Christmas shopping
3 A further three deaths and 1,167 new Covid-19 cases reported in the Republic
4 Martin only told of contact tracing problem when texted Irish Times story
5 Traffic light system for Covid detection to operate at Irish airports in November
Real news has value SUBSCRIBE