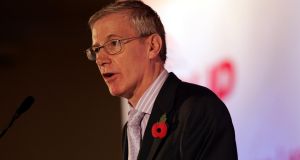 Gregory Campbell has been accused of being “crass and offensive” by Sinn Féin after comments he made in a Facebook post. File photograph: Eric Luke

The East Derry DUP MP Gregory Campbell has been criticised by Sinn Féin for a revisiting of his “curried yoghurt” comments about the Irish language.

The programme also recounted how he went on to broadcast Nazi propaganda to Ireland during the war.

Mr Campbell in his Facebook post wrote he was informed that “BBC 2 had a programme on tonight about a suspected German spy who lived in the RoI during the war.

“The humorous bit was that he was supposed to have spoken Irish with a German accent,” said Mr Campbell.

Some people commenting on his post found it amusing but others were critical, viewing it as a repeat of his 2014 remarks in the Northern Assembly when he said to the speaker, “curry my yoghurt, a can coca colyer.”

This was seen as a semi-phonetic parody of, “Go raibh maith agat, a Ceann Comhairle.”

It caused considerable controversy at the time and led to charges that the DUP was being deliberately disrespectful to both the Irish language and Irish people. It also galvanised Irish language activists campaigning for an Irish language Act. Such legislation is promised in January’s New Decade, New Approach deal that restored the Northern Executive and Assembly after a three-year collapse.

Part of the reason for that collapse was blamed by Sinn Féin on issues such as the DUP’s attitude to the Irish language.

Mr Campbell’s short Facebook post comes at a time when relations between the DUP and Sinn Féin are strained, particularly over the claim that Sinn Féin breached social distancing regulations at the funeral of senior republican Bobby Storey.

Sinn Féin MLA Ms Sheerin responded on Monday by accusing Mr Campbell of “attempting to mock the Irish language” and describing his comments as “crass, offensive and despicable”.

“Sadly, this is not the first time Gregory Campbell has insulted the Irish language community with his offensive anti-Irish mockery. These comments are reminiscent of 2014,” she said.

“When the Assembly was restored in January, DUP leader Arlene Foster said identities should be respected. Perhaps Gregory Campbell needs to reflect on the words of his party leader,” she added.

“It is long past the time that disrespect like this is allowed to go unchallenged and time the DUP genuinely embraced equality and respect,” added Ms Sheerin.