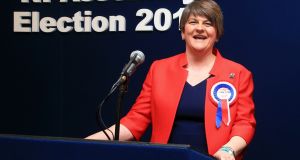 The 2016 Northern Assembly elections came to a conclusion on Saturday afternoon with the DUP and Sinn Féin still the dominant parties in Northern Ireland, although Sinn Féin dropped a seat and sustained a reduction in its vote by almost 3 per cent.

First Minister Arlene Foster and Deputy First Minister Martin McGuinness will, in the coming two weeks, seek to agree a programme for government with the three other main parties, after which the next Northern Executive is to be formed. The first engagement is expected to start today.

The DUP leader Ms Foster, who topped the poll in Fermanagh and South Tyrone, said she was “absolutely delighted with the mandate” given to her and her party. “People have spoken and they have spoken very clearly,” she said.

Mr McGuinness, after moving from Mid Ulster, also topped the poll in his native Foyle constituency. Sinn Féin had hoped this would lead to the party gaining a third seat at the expense of the SDLP.

This did not happen, however. The SDLP lost one of its three seats, but it was won by veteran socialist, activist and Irish Times columnist Eamonn McCann of People Before Profit.

That party enters Stormont for the first time with two seats, as its candidate in Belfast West, Gerry Carroll, topped the poll and won a seat at the expense of Sinn Féin.

Mr McGuinness said the loss of a seat and the drop in vote by 2.9 per cent from 2011 had to be seen in the context of difficulties experienced by the last executive such as economic instability and British government “austerity policies”.

“That is a pretty remarkable performance given the challenges we have faced over the course of the last Assembly term,” said Mr McGuinness.

The most disappointed of the political leaders was the SDLP’s Colum Eastwood after his party dropped from 14 to 12 seats.

The SDLP lost seats in his own Foyle constituency, in Belfast South and in Upper Bann, where Sinn Féin gained a seat at the expense of former SDLP deputy leader Dolores Kelly. Its current deputy Fearghal McKinney lost out in Belfast South.

Mr Eastwood attempted to put a brave face on the losses.

“We’ve had a rough couple of years, we’ve begun to change the face of the party and we’re going to build from here,” he said.

The Ulster Unionist Party won 16 seats, the same representation it had in 2011. UUP leader Mike Nesbitt, who topped the poll in Strangford and helped return a second candidate in the constituency, had hoped to win 18 or 19 seats.

Alliance leader David Ford was also hoping to increase representation by three additional seats but had to be satisfied with consolidation as the party held on to its eight seats.

Green Party leader Steven Agnew was comfortably elected in North Down, while the party gained a second seat with Clare Bailey winning in South Belfast.

Traditional Unionist Voice leader Jim Allister was returned in North Antrim, but failed to see any of his candidates elected. Independent unionist Claire Sugden was returned in East Derry.

In order to succeed, the next Northern Executive will require a harmonious working relationship between the DUP and Sinn Féin.

The DUP MP for East Derry, Gregory Campbell, decided to test that relationship by taunting Sinn Féin over failing to win an extra seat in Foyle where one of Sinn Féin’s successful candidates was former hunger striker Raymond McCartney.

Mr Campbell posted on Facebook that Mr McCartney was “a bit more successful at electioneering than he was at hunger-striking”.

Outgoing Sinn Féin Minister for Education John O’Dowd described Mr Campbell as a “loose cannon” and said on BBC that his comments were made when “we’re talking, ourselves and the DUP, about going in to discuss a programme of government and having mutual respect, mutual trust and mutual understanding within that”.