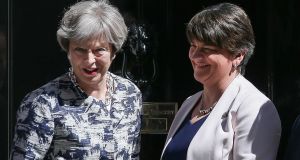 DUP leader Arlene Foster said she was ‘delighted’ with the package she secured from Theresa May in return for her party supporting the British Conservative government. Photograph: Getty Images

The DUP has agreed a deal with British prime minister Theresa May that will allow for an extra £1 billion of spending in Northern Ireland on health, education, infrastructure, improved broadband and support for deprived areas.

As the British and Irish governments engaged in late night talks with the DUP and Sinn Féin on Monday night to try to restore the Northern Executive, DUP leader Arlene Foster said she was “delighted” with the package she secured from Ms May in return for her party supporting the British Conservative government.

As well as £1 billion of new finance the deal would also allow a restored Northern Executive greater flexibility in relation to £500 million of funding already allocated by the British government.

Late on Monday, Minister for Foreign Affairs Simon Coveney and Northern Secretary James Brokenshire were chairing negotiations with the DUP and Sinn Féin on restoring the Executive. Outstanding issues included dealing with the past, the Irish language and same-sex marriage.

The British government, in a UK-wide commitment, has also pledged to maintain the pensions “triple-lock” introduced in 2010 guaranteeing to increase the state pension every year by the higher of inflation, average earnings or a minimum of 2.5 per cent.

It also made a commitment to maintain winter fuel payments for the elderly throughout Britain and Northern Ireland.

On dealing with the past, the British government said it would seek to create a number of implementation bodies agreed in the 2014 Stormont House Agreement. This would involve a public consultation. The aim would be for the bodies such as the Historical Investigation Unit to “operate in ways that fair, balanced and proportionate and which do not unfairly focus on former members of the (British) armed forces or police”.

The DUP-Tory deal allows for a restored Northern Executive to begin moves to harmonise Northern Ireland’s corporation tax rate with the Republic’s 12.5 per cent rate. There were fears that such devolution of corporation would be delayed by a number of years but the deal opens up the possibility of major movement by the autumn.

The agreement proposes “city deals” and special enterprise zones to boost investment. There will be consultation on reducing or reducing VAT and air passenger duty.

Breaking down the £1 billion the deal provides £400 billion over the coming two years to improve infrastructure. This includes monies for a major city centre Belfast road project.

A total of £150 million will be provided over two years for “ultra fast” broadband services for Northern Ireland. There will be £50 million each to address “immediate pressures” in health and education. There will also be £200 million for health service transformation over the coming two years and “recognising the historic impact” of the Troubles £50 million over the next five years for mental health provision.

In return the DUP has pledged in a “confidence and supply agreement” up until 2022 that the party’s 10 MPs will support the Conservative government in key votes over issues such as the British government programme for government, the budget, the final Brexit deal and British national security.

He couldn’t quite bring himself to say it about the deal Ms Foster extracted from Ms May to keep her and the British Conservatives in power. “I may be able to say, ‘Well done, Arlene’ when the Executive is in place,” he conceded.

Mr Adams said the DUP commitment to support any deal on the UK exiting the European Union was a “blank cheque for a Tory Brexit which threatens the Good Friday Agreement”.

He said that the “allocation of additional funds could help to ease the enormous pressure on our public services” but that the “devil is in the detail”.

In relation to the armed forces covenant Mr Adams said Sinn Féin would “resolutely oppose” any preferential treatment for British soldiers “either in terms of legacy or the provision of public services”.