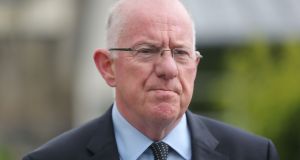 Minister for Justice Charlie Flanagan has contacted Fine Gael TDs criticising Minister for Transport Shane Ross and encouraging them to speak out over the Independent Alliance TD’s moves to reform the judicial appointments system.

It comes as the Chief Justice and the presidents of a number of courts wrote to Taoiseach Leo Varadkar criticising the Judicial Appointments Bill, which they said could have serious implications for the administration of justice in Ireland.

Mr Flanagan has already publicly said he will listen “to the concerns of TDs” and The Irish Times has learned he texted Fine Gael colleagues over the weekend criticising Mr Ross.

“The Judicial Appointments Bill will be debated next week,” the text said. “There has been some negative comment regarding the judiciary and many people are unhappy with aspects of the Bill. Fine Gael must fully emphasise the absolute independence of judges and the courts under our Constitution.

“I am disappointed at some of the comments of Minister Ross. Could I suggest that you speak on the Bill and I would be happy to provide a briefing on Tuesday. Best regards. Ch.”

Mr Flanagan’s spokesman said he was aware the Minister had contacted backbenchers asking them to speak on the Bill, but did not comment on the contents of texts.

Taoiseach Leo Varadkar has committed to the Independent Alliance that the Bill would be passed before the Oireachtas summer recess in an effort to defuse the rowover former Attorney General Máire Whelan being appointed to the Court of Appeal.

Mr Varadkar at the weekend said both judges and politicians needed to respect the separation of powers between the Oireachtas and the judiciary.

The Bill - which has been met with hostility from the judiciary - is expected to be discussed by Cabinet on Tuesday before coming before the Dáil.

Carlow-Kilkenny TD Pat Deering said he wanted to see changes to the Bill before supporting it.

Mr Deering said he was uncomfortable with the composition of a new commission that will draw up a shortlist of judicial nominees for the Government.

The commission will have a lay majority and lay chairperson but Mr Deering said he would like to see people with specialised knowledge “should have more of an influence than people who come in off the street”.

Another TD privately said that changes must be made.

Mr Justice Peter Kelly, the President of the High Court, last week said the Bill was “ill advised” and “ill conceived” and said the Government was putting it through the Dáil with “undue haste”.