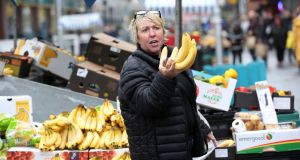 A recent report from the Moore Street Advisory Group found the market was in a ‘vicious circle of decline’, with a lack of basic facilities such as toilets and inadequate power, water, lighting and cleaning. Photograph: Laura Hutton

Four new market stalls are to be allocated in Dublin’s Moore Street, the first new pitches designated for the street for more than 20 years.

Dublin city manager Owen Keegan has told city councillors the new casual trading licences will be for the sale of “high-end produce/arts and crafts”.

Market traders and other businesses operating on Moore Street said while the new stalls were welcome, trading conditions on the street were intolerable.

“Daily we have groups of drinkers congregating around the stalls. The council keep saying it’s a matter for the police, but if every trader that had left over the years had been replaced, the street would self-regulate and we wouldn’t have these problems,” Tom Holbrook, who operates a fruit and vegetable stall, said.

While there are spaces for about 70 stalls on the street, fewer than 20 traders remain. The council stopped issuing new casual trading licences for the market in the late 1990s to pave the way for the development of the Millennium Mall shopping centre. That, and subsequent shopping centre plans, never went ahead and the site is now owned by UK property group Hammerson, which plans to lodge a fresh planning application for a mixed-use retail, office, hotel and residential development next year.

Mr Keegan said the council was committed to revitalising the market “in conjunction with the Hammerson development”.

Stephen Troy, who runs the oldest butcher’s shop on the street, said the council should stop relying on private developers to save Moore Street.

“The council needs to stop waiting for Hammerson’s plans. It’s not the prerogative of a private developer to determine what happens on the street – the council needs to address these problems. The street traders and the businesses who are paying rates deserve better.”

A report from the Government-appointed Moore Street Advisory Group, recently submitted to Minister for Culture and Heritage Josepha Madigan, found the market was in a “vicious circle of decline”, with a lack of basic facilities such as toilets and inadequate power, water, lighting and cleaning.

Ms Madigan has tasked the council with addressing specific recommendations of the report that it “support the retention and development of the market” and that it appoint an expert group to “lead the urgent regeneration” of the market.

Mr Keegan said the expert group was being set up and would make recommendations on how to “achieve the revitalisation” of the market.

However, Mr Holbrook who has represented the stall holders on several advisory groups, said he was worried the new group would be a “talking shop”.

“There are things the council should do straight away; provide proper lighting and sanitation for a start. I am worried this new group is another delaying tactic, and I’m worried that just putting in four new traders, when it should be 40 is setting them up to fail.”

A spokesman for Hammerson said its proposals “seek to protect and enhance Moore Street’s unique heritage including its market”.

Separately, Mr Keegan said the council currently “does not propose to engage” with existing traders who wish to surrender their licences.

Last month a document entitled “Licence holders who wish to be considered to exit the market”, signed by the traders who hold casual trading licences to operate on Moore Street, was sent to the council.

However, Mr Keegan said the council was not seeking the removal of pitches from the street.

“Correspondence was received with a list of current Moore Street traders who have apparently indicated a desire to surrender their licences,” Mr Keegan said. “Council management does not propose to engage with these traders in relation to the possible surrender of their licences at this stage.”