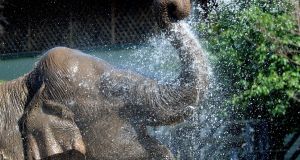 The warm and sunny weather is set to continue for at least two days for most of the country.

Temperatures reached 28 degrees on Thursday at Shannon, making it the hottest day of the year so far.

Temperatures will reach 27 degrees in the midlands on Friday with most parts of the country enjoying long spells of sunshine, although some cloud and rain will creep into the southwest before the end of the day.

Saturday will see highs of 25 degrees again in the centre of the country with the chances of some rain in western coastal areas.

The long-term forecast into next week is for summer weather to continue with mostly dry and sunny weather, but it will not be as hot as this week. Temperatures will reach highs of 22 degrees next Wednesday.

France has declared the country’s first red weather warning for a heatwave on Friday as temperatures are expected to reach 44 degrees in the south of the country.

The red alert is for the southern departments of Herault, Gard, Vaucluse and Bouches-du-Rhone as sweltering air from the Sahara desert crosses most of continental Europe.

The mercury is set to rise to 42 degrees in Montpellier on Friday and touch 43 degrees in Arles and Avignon.

In Spain, wildfires are burning over some 4,000 hectacres in Catalonia, and firefighters are struggling to cope in the extreme heat.

Madrid is expected to experience highs of more than 40 degrees every day until Sunday, and it will get even hotter in other parts of the centre of the country.

In Britain, festivalgoers at Glastonbury, so often a washout and a mud bath, will enjoy temperatures of 28 degrees on Friday and 27 degrees on Saturday.

The organisers are handing out sun lotion, and there will be a record number of water stations on site.

The festival emailed ticketholders on Monday advising them to bring hats, sunscreen and reusable bottles for water – and not to drink too much alcohol.