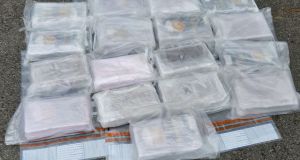 A quantity of cocaine seized by the Garda in Co Meath on Saturday. Photograph: An Garda Síochána

Gardaí have seized cocaine valued at €1.2 million during a stop and search operation in Co Meath.

The intelligence-led operation was undertaken with the assistance of the Revenue Customs Service.

It resulted in the discovery and seizure of a quantity of cocaine with an estimated street value of €1.2m.

Two men, aged 35 and 62 years, were arrested and detained on Saturday night, under Section 2 of the Criminal Justice (Drug Trafficking) Act, 1996, at Ashbourne Garda Station.

Detective Chief Superintendent Angela Willis, who is head of the bureau at GNDOCB, said, “An Garda Síochána is committed to continuing to disrupt the activities of organised criminals supplying drugs to our communities. This seizure of a substantial quantity of cocaine today is another example of our relentless efforts to disrupt this supply, enabling us to keep people safe.”