Coronavirus: Tom Hanks has the ‘blahs’ as he and Rita Wilson recover in isolation 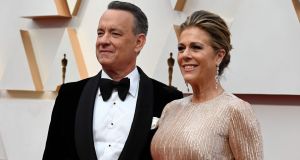 Tom Hanks has been released from the Australian hospital where he was in isolation since testing positive for the coronavirus last week. File Photograph: Robyn Beck / AFP via Getty Images

Tom Hanks says he has the “blahs” but no fever as he remains insolation with his wife, Rita Wilson, after their coronavirus diagnosis in Australia.

The couple were discharged from hospital on Tuesday, a representative for the actor confirmed.

The Oscar-winner says he is doing chores around the house and getting beaten at cards by Wilson.

“Hey folks. Good news: One week after testing positive, in self-isolation, the symptoms are much the same. No fever but the blahs. Folding the laundry and doing the dishes leads to a nap on the couch. Bad news: my wife has won six straight hands of gin rummy and now leads by 201 points,” he posted on Instagram on Tuesday evening.

Hey folks. Good News: One week after testing Positive, in self-isolation, the symptoms are much the same. No fever but the blahs. Folding the laundry and doing the dishes leads to a nap on the couch. Bad news: My wife @ritawilson has won 6 straight hands of Gin Rummy and leads by 201 points. But I have learned not to spread my Vegemite so thick. I travelled here with a typewriter, one I used to love. We are all in this together. Flatten the curve. Hanx

The actor included a photo of an old Corona typewriter in the post which he brought with him to Australia. Hanks published his debut short-story collection in 2017.

Hanks mentioned a previous post with a picture of toast a few and Vegemite a few days earlier where people pointed out he may have used too much. He said he “learned not spread my Vegemite so thick.”

He ended the post with: “We are all in this together. Flatten the curve.”

The couple were in Australia Gold Coast for Hanks’ latest film, an Elvis Presley biopic directed by Ban Luhrmann. Hanks is cast in the role of Presley’s manager, Colonel Tom Parker. The film,which is due to be released in October in 2021,has suspended production, Warner Bros said.

Wilson, a singer-songwriter and fellow actor performed in Brisbane and Sydney before the couples’ diagnosis.

Contacts of Hanks and Wilson were traced last week, authorities confirmed, but no other results of those efforts have been made public.