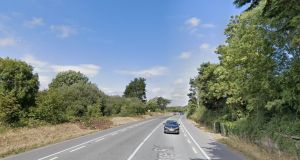 The R675 at Ballykinsella, Co Waterford, where a motorist was caught travelling at 138 km/h in an 80 km/h zone during National Go Slow Day last month.

New graduated penalties for motorists caught driving over the speed limit were approved by the Cabinet on Tuesday. Under the new system there will now be a range of escalating penalties depending on the extent to which a driver is over the limit.

In future for drivers detected 30km/h over the limit there is a new stand alone offence which will result in an automatic court appearance. The penalty on conviction for this offence will be a fine of up to €2,000 and seven penalty points.One example of such speeding was detected recently in Co Waterford.

On a Friday morning, just over a month ago, a car came hurtling down a road in Ballykinsella, a rural townland around 5km outside the popular seaside resort of Tramore, Co Waterford.

As a regional road, the R675 in Ballykinsella has a speed limit of 80 km/h. The car was travelling at 138 km/h – not far off twice the limit and well in excess of even the maximum speed limit in Ireland of 120 km/h, which applies only on motorways.

Unfortunately for the driver, it was National Slow Down Day and GoSafe vans fitted with speed cameras clocked the offence. It was to be the worst detection of the speed limit being broken in a 80km/h zone during the 24-hour Garda operation.

Analysis by the Road Safety Authority (RSA) shows almost eight in ten road deaths during the first half of this year were in rural areas – the majority of them on an 80 km/h zone.

By the end of July, 89 people had been killed in road collisions around the country, averaging at 13 deaths every month.

This is up from the average of 12 every month for the same period the previous year, with the trend going the wrong way for the Government’s stated target of reducing road deaths to an average of 10 or less a month by next year.

According to a provisional review of fatalities between January and July by the RSA, 70 occurred on rural roads, compared to 19 on urban roads.

Of the 70 on rural roads, 49 were within an 80 km/h zone, including four pedestrians, five cyclists and seven motorcyclists.

A further 19 died after a collision on a 100 km/h zone (including three pedestrians, one cyclist and one motorcyclist), while two were killed on a 120 km/h zone.

In urban areas, road deaths are most likely to occur in a 50 km/h zone.

Up to the end of July, 16 of the 19 urban fatalities – the vast majority – occurred in a 50 km/h zone, including seven pedestrians and one motorcyclist.

Another two (including one pedestrian) died as a result of a crash in a 30 km/h zone while one person was killed in a 60 km/h zone.

Dublin, with nine deaths, had the highest number in a county by county breakdown, followed by Tipperary with eight and Cork with seven.

There were six road deaths each in Kerry and Limerick, and five each in Donegal, Galway and Wexford. There were none up to the end of July in counties Longford and Cavan.

The analysis also shows that between 6pm and 9.59pm is the worst time for fatal collisions in Ireland, with 25 of the overall 89 deaths happening during that evening period.

Sunday was the most dangerous day, accounting for 21 of the overall 89 deaths. January and February are the worst months, with 16 deaths occurring in each of these winter months.

The RSA study further shows drivers are the most likely victims in crashes. More than half (49) of road deaths for the first seven months of the year were drivers, a rise of 11 on the figure for the same period a year previously. Nine motorcyclists were among the fatalities, an increase of two.

Road deaths are reducing among passengers (10, down two), pedestrians (15, down three) and cyclists (six, down two).