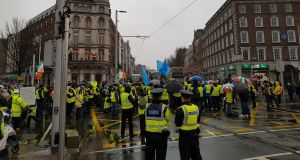 More than one hundred people have attended a protest in the centre of Dublin in solidarity with the French “yellow vest” demonstrations.

Irish protesters wore yellow vests and some had hard hats, while others tied scarves over their faces. The chanting was mainly anti-Government in nature.

Those who gathered outside the Custom House overlooking the River Liffey before marching to parliament at Leinster House included pro-Palestinian organisations and socialist republicans.

Others involved in the gathering said they were concerned about the use of fluoride in the public water supply.

The demonstrators blocked traffic in the city centre for a brief period.

The “yellow vest” movement in France, which takes its name from the fluorescent safety vests French motorists must carry in their vehicles, emerged in mid-November as a protest against fuel tax increases.

It soon expanded into an expression of rage about the high cost of living in France and president Emmanuel Macron’s policies. – PA