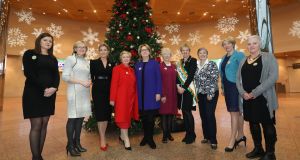 When Mary Hanna Hourigan attended a meeting to discuss how the regional health forum in the south of the country was being run, she decided to air her grievances.

The Fine Gael councillor told a meeting attended by political colleagues that she didn’t think she was being heard, that she couldn’t get her questions answered and that she had frustrations.

“Well, if she’s frustrated, I know what I would do to sort her out,” a male colleague remarked.

As she recounted this story on Friday at the Politics Needs Women conference in the Convention Centre in Dublin, the audience recoiled.

“Nobody challenged him. Nobody took him on and said, ‘you shouldn’t speak to someone like that.’ It went without any consequences for him,” she said.

Ms Hanna Hourigan was one of a number of women in local and national politics who spoke about their experience of the job on Friday, on the 100th anniversary of women’s suffrage in Ireland.

Former president Mary McAleese said political parties had a responsibility to spot talented women and to facilitate them to run.

“ For me, it is not about saying that women have something special to offer or a particular view of the world. But rather they have a bunch of different views, talents, insights, and wisdoms.”

The message around what a political career entails also needs to change, she said. “It is a very, very tough life. Ask Theresa May how tough it is. There is this awful epithet that all political lives end in failure. For a young woman starting out on a career, that isn’t the kind of message you want.”

Sinn Féin TD Kathleen Funchion said that from her point of view, the biggest challenge is juggling having children with the role.

“I have two boys, 11 and seven, so I just feel like I am constantly running and racing and I am not sure where I am, you don’t know what you are achieving sometimes. It is constant go, go, go. At times it can catch up with you,” she said during a panel discussion, adding that not enough is being done to make politics more family-friendly.

Female politicians are also risk being pigeonholed into roles which would be considered more suited to a woman, the conference heard. Labour TD and former tánaiste Joan Burton said she nearly walked away from politics when she didn’t get the nod for the finance ministry in 2011, as had been expected at the time. She said she had a long argument with Labour leader Eamon Gilmore over the decision. “We had our discussion, Eamon was not for turning. But I felt I would let down women in general if I decided to walk.”

Ms Burton was given the social protection brief instead.

But even when settled into a role, there are other less obvious worries for high-profile female ministers, Ms Burton said. “Women suffer from the syndrome of being too tall, too small, too fat, too thin, our dress is too colourful, or it is so dull and dowdy.

“I recall someone criticising me during the last general election on a debate of party leaders which I was deemed to have won, but what did they not like? The fact that I was wearing shiny, nude-coloured tights. What do you say to that?”

This assumption that all politics ends in failure, it is such a macho assumption

Fellow former tánaiste Frances Fitzgerald used her speech to appeal for a different kind of politics. “It is a tough business, there are tremendous highs, and some terrible lows. I think a lot of people are put off by some of what they see in politics.

“I’ve seen very different politics in Norway and Sweden in the parliament. I don’t think we have to follow the Westminster model,” she said.

“This assumption that all politics ends in failure, it is such a macho assumption. I mean, why does it have to? Of course there is a difference of ideas. Let’s try and do our politics in a way that is constructive, not macho positioning.”