Huge shortage in flu vaccine due to higher than ever demand, says Cork doctor 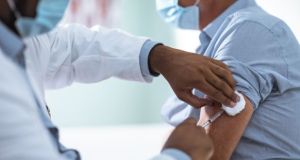 GPs are being asked to ‘play God’ in having to decide who to give the flu vaccine to because of shortages in the availability of the medicine due to an increase in demand , says one GP. Photograph: iStock

GPs are being asked to “play God” in having to decide who to give the flu vaccine to because of shortages in the availability of the medicine due to an increase in demand , a GP has said.

The GP, who didn’t wish to be named, contacted The Irish Times to highlight the fact that the HSE are telling GPs that they have one more delivery of the vaccine to give to GPs and will not be able to source any more this year.

“I get that there is a shortage of the vaccine but we’re just playing catch up and now we’re being asked to play God in terms of who should get a vaccine and who should not,” said the GP.

“Pregnant women are the most vulnerable category but now we’re saying to them ‘maybe not’ because pregnant women are now in the additional risk group to be vaccinated after the first priority group.”

According to the letter sent by the HSE to all GPs, the HSE points out that there has been an unprecedented demand for the flu vaccine both in Ireland and internationally while the amounts available from manufacturers are finite.

“By October 28th, the national cold chain service will have delivered 950,000 QIV influenza vaccines to sites around the country, an increase in the same time last year,” said the HSE.

“The fourth delivery cycle of influenza vaccines will be delivered from October 29th over a two week period and will be completed by November 11th. Your fourth delivery will be 25 per cent of your last season’s usage.”

According to the HSE advice to GPs, the vaccine should be administered first the Highest Priority Risk Group which includes people aged 65 and older and healgth care workers and others with direct patient contact.

Pregnant women fall into the second category, described as the Additional Risk Groups be vaccinated later and this group also contains individuals with underlying health conditions and other health care workers.

According to the GP, the situation is already difficult enough for GPs but the HSE categorization failed to include people like teachers, Special Needs Assistants and gardai whom he believes should all be included on the list.

“If I have 60 year old vulnerable diabetic, hypertensive with a history of heart problems, I have to tell them ‘Sorry – I can’t give you the flu vaccine’ – it’s a bit of a shambles this year but I don’t think we can blame anyone.”

“I got 30 vaccines yesterday but that goes nowhere towards meeting the demand in our clinic. We’ve 190 on our waiting list of people who have already rung and I’m going to get another 40 in two weeks’ time and then I’m done.”

The GP questioned how the HSE was unable to source further stocks of vaccines while it appeared that private pharmacies were able to source sufficient supplies to cater for those paying for the vaccine privately.

The HSE said it had purchased almost 2 million doses of influenza vaccine this year, which is nearly double the amount administered last season and these includes 1.4 million doses of Quadrivalent Influenza Vaccine (QIV) for adults.

This figure of 1.4 million adult doses of QIV is over 20 per cent more QIV than was used last season, as increased uptake was expected in the targeted groups, as identified by The National Immunisation Advisory Committee (NIAC), it said.

By October 28th, a total of 950,000 QIV influenza vaccines will have been delivered around the country, an increase of 10 per cent compared to the same time last season, said the HSE.

“There has been unprecedented demand for influenza vaccine this season, which is a positive reflection of public awareness,” said the HSE adding it was prioritizing the most vulnerable to maximise the benefit of the remaining stock

The HSE said that it was basing its decision in terms of who should get the vaccine first on World Health Organisation (WHO) recommendations for prioritisation of influenza vaccine during Covid-19.

The WHO had identified the highest priority risk groups for vaccination are people aged 65 years and older and healthcare and home care workers with direct patient contact, it said.

The HSE said it had also purchased 600,000 doses of Live Attenuated Influenza Vaccine (LAIV) for children aged 2-12 years old and this programme of free vaccination was well underway across the country.

The HSE said that those who were not eligible for HSE influenza vaccines have to source these privately but the HSE was not involved in the procurement or distribution of private stock, it said.