Diarmuid Martin horrified at ‘new language of racism’ in Ireland 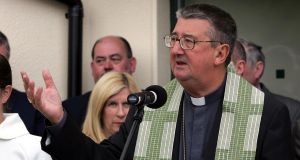 Archbishop of Dublin Diarmuid Martin says people need to be wary of a ‘seductive culture’ which plays down the ‘value of each life’. Photograph: Eric Luke

The Archbishop of Dublin, Diarmuid Martin has expressed horror at what he describes as “traces of racism” among Ireland’s Roman Catholics community.

In a sermon delivered to mark the beginning of Advent on Saturday he expressed grave concern about the “emergence of a new language of racism” in Ireland.

He said although it was “at times understated in its expression” it was “nasty in its effects on men and women who need our help, our care and our respect”.

He said he was “horrified to find traces of such racism among believers” and suggested that terms including “refugee” and “asylum seeker” should “only arouse heartfelt concern among Christians”.

Described Advent as a “season of hope” Dr Martin said it was a time to reflect on the meaning of the “coming of Jesus Christ into human history”.

Drawing parallels between the experience of injustice under which the Jewish people of the Middle East lived in pre-Christian times and “the injustice, the evil, the violence” that exists now, the Archbishop said Christians of every generation were “called to be awake and attentive to where society is slipping into wrong ways”.

He highlighted the plight of people “burdened by homelessness and poverty, intolerance and discrimination, suffering and anxiety”.

And he condemned the “renewed violence on our streets and the callousness of those who feel they can intimidate our society into weakening our opposition to that business of death that is the drug trade”.

He said people need to be wary of a “seductive culture” which plays down the “value of each life or which introduces into our culture criteria which would determine that one life has less value than another”.

He was speaking as he celebrated Mass in the Church of St Joseph the Artisan, Bonnybrook, in Dublin 17.

Racism has been on the rise across Europe in recent years and politicians stoking up fears over immigration have fuelled the rise of populist right-leaning xenophobic parties across Europe.

Closer to home local campaigns against direct provision centres, as well as widely condemned comments critical of asylum seekers by Verona Murphy and Noel Grealish, have raised fears that racism t may become a phenomenon here.

Ms Murphy secured 23 per cent of the first preference vote in the Wexford byelection.