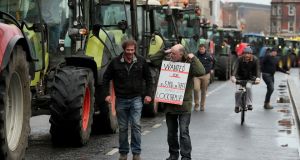 Farmers need to have more faith in the ability of farm organisations to negotiate on their behalf to avoid a repeat of the protests that hit Dublin earlier this week, according farmers attending a major farming conference.

Farmers attending the Irish Creamery and Milk Suppliers Association (ICMSA) AGM in Limerick on Friday expressed hopes that a repeat of the tractor protest which hit Dublin last Monday and Tuesday can be avoided.

ICMSA member, Michael Guinan from Rahan, Co Offaly said he believed farmers were better off negotiating rather than protesting.

“Hopefully it’s been resolved because nobody would like to see a return to that type of protest coming up to Christmas - I think we got a lot of sympathy in Dublin because they understood that beef farmers were in a bad situation.

“It’s not fair that the people who have the product for the least amount of time get the biggest share of the profit and I think people understand that the farmer who rears the animals for three years should get their fair share.”

Mr Guinan, who milks 80 cows on a 220 acre holding, pointed out that some 60 per cent of the Irish beef market is filled by dairy farmers and the figure is growing so the price of beef is impacting beyond those who are solely beef producers.

He said it was unfortunate that some beef farmers felt they had no option but to protest in Dublin but he hoped that they will now realise that negotiation rather than protest is the way to achieve their goals.

“The main farm organizations, the ICMSA and IFA and Macra and ICSA - we have structure and we have the faith to go into negotiation and we will go back and sell a deal to our members and 99 per cent of the time they will back us.

“But that’s where I think the new movements have failed - their spokesmen going and negotiate but people should listen to them when they come out because they have done their best and people need to have faith in them.”

Fellow farmer, Pat O’Brien from Tullamore in Co Offaly said people need to be patient, offering the example of Sir Alex Ferguson winning nothing with Man Utd in his first season before leading the club to unprecedented success.

“You don’t get everything you want the first time but the people who were negotiating last week in Dublin did their best and achieved the best they can at this point in time – it is not to say they won’t achieve more down the road.”

Denis Drennan from Clara in Co Kilkenny said there was clearly sympathy initially for farmers in Dublin but given that injunctions against two farmers had been lifted, he saw no reason for any repeat of the protest.

Mr Drennan questioned how organised and coherent the tractorcade protest was, pointing out that, unlike the ICMSA or the IFA, the protestors did not have a constitution and it was not always clear what their full demands were.

“I’d say if you asked most fellows in the tractorcade what were the three main things they wanted, I doubt you would get a united front from them on the issues which makes it virtually impossible to get agreement and a resolution.”

“We had a Beef Plan Movement, saying they were not coming off the picket unless they get €4 a kilo - they’re off the picket two months and beef is still at €3.55 a kilo - you have to be realistic,” he said.

“The average price for an R3 steer in Ireland at the time was €3.70 a kilo and the average price across Europe was €3.63 a kilo - my local factory tells me beef would now be €4 a kilo but for the glut caused by the blockade.”

Sports bodies asked to keep electronic records of those at training