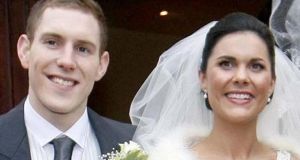 The daughter of Co Tyrone football manager Mickey Harte was strangled in the bath of her hotel room shortly after lunch with her husband John while on their honeymoon in 2011.

The family of Michaela McAreavey have criticised the “kangaroo court” that acquitted two men accused of her murder in Mauritius.

The daughter of Co Tyrone football manager Mickey Harte was strangled in the bath of her hotel room shortly after lunch with her husband John while on their honeymoon in 2011.

Two local hotel workers were acquitted of her murder following a high-profile trial in Mauritius in 2012.

Mr McAreavey, who has since remarried, said his quest for justice will not end until those responsible have been jailed.

He told Newstalk FM on Friday the family have spent nearly nine years working with the Mauritian authorities to get justice for Michaela.

“Our approach was there is no point shouting and roaring here and getting their backs up,” he said.

“We needed these guys on side and we felt we should support them and give them an opportunity to right the wrongs that happened in 2012.

“We felt that was our best chance at actually delivering justice. That was the main objective – but as time went on, that has just sort of faded away.”

He said the high-profile nature of the trial turned it into “a big circus act”.

Mr McAreavey said the family have made a podcast called Murder in Mauritius about the case to shine a light on elements that have never been revealed and what the trial was like.

“The evidence is just so strong – and that is why we really wanted to talk about the depth of the evidence in the podcast.”

He said the podcast will give listeners an idea of what is was like to attend the “kangaroo court” every day.

But he said he was still confident the jury would convict the two men.

“I had faith in the jury because everything else that was going on didn’t really matter,” he said. – PA