Developer seeks removal of private owner from board 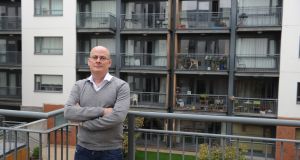 The developer of a Dublin apartment complex with building defects is seeking the removal of the only private owner from the board of the owners’ management company (OMC).

The Irish Times revealed this week that Sherborough Enterprises, a development company controlled by members of the family that owns the O’Callaghan hotel group, expects apartment owners at Cathedral Court in Dublin 8 to pay more than €5,000 each to repair building defects in an apartment block that it built and still partly owns.

A building surveyor’s report found problems with a large number of balconies at the site in 2016, while a fire safety survey last year also found a number of fire-stopping shortcomings.

Cearbhall Beggan is the only private owner and volunteer director on the board of the Cathedral Court OMC; the only other director is Paul O’Callaghan, son of hotelier Noel O’Callaghan and director of Sherborough.

Mr Beggan said yesterday he feels he is now being “bullied” off the board for questioning the rationale behind charging private owners for the remediation of building defects rather than pursuing the developer first.

In February, before any private owners were made aware of the issues, Paul O’Callaghan informed Mr Beggan that Sherborough Enterprises had already carried out defect remediation works on the three penthouse apartments it owned and expected the €15,000 cost of this to be paid out of the management company’s sinking fund.

When Mr Beggan, on behalf of the OMC, questioned why private owners would pay for the work instead of pursuing the developer, Mr O’Callaghan responded to say: “I suggest you go get legal advice as we will be heading to court if you think the suggestion of yours is happening.”

He also said that if no compelling legal advice contrary to their own was found, Sherborough Enterprises would use its majority vote at an egm to push through the remediation levy on all owners.

In April 2019 Mr Beggan was chair of an egm where he blocked a vote that would introduce a €5,300 levy on every apartment owner to remediate fire-safety and balcony defects because “members had not been fully informed and the resolution inherently accepted without discussion that the OMC would pay for the work”.

It was only after this egm was held, where both votes were blocked, that Sherborough Enterprises requested Mr Beggan be removed from the board of OMC.

In a letter, issued to all owners on May 16th last, the company said it wished to “express our complete displeasure with the performance of the board of the OMC for Cathedral Court” and that “we feel our rights as a member of the OMC are being suppressed”.

The letter states that the work required on the balconies “are primarily due to the fact that absolutely no maintenance from day one was carried out by the OMC and not due to defective work as alleged”.

However, the building surveyors report from McGovern O’Brien in February 2016 states: “It is clear that there is poor workmanship and detailing and untreated timbers are contributing to the defects, as 50 per cent of the balconies inspected are showing signs of accelerated deterioration of the timber sub frames”.

The Irish Times understands that following the distribution of this letter a number of private owners came forward to defend Mr Beggan and the voluntary work he has done for the OMC over the last number of years.

Mr Beggan said: “I have worked in a voluntary capacity for the board of Cathedral Court for the last seven years. Over that time I’ve worked on many efficiencies and improvements, including reducing electricity and heating bills and have made estimated savings of over €350,000.

“The biggest beneficiary of those savings would have been Sherborough Enterprises [because it owns 64 out of 104 apartments]. We have never had a problem working together until I questioned the unauthorised spend of €15,000 on the remediation of three private penthouses, owned by the developer.

“I was absolutely shocked to receive such a curt response to that query saying we will be heading to court. I feel I am the only director working in the interest of the OMC.

When contacted, Paul O’Callaghan responded: “[Sherborough Enterprises] has exercised its right to have certain motions tabled at a meeting of the members of the OMC – these motions will be determined in accordance with the constitution of the OMC.

“In my own capacity as Director of the OMC I shall continue to act in the interests of all members of the OMC.”

The owners’ management company has now requested that Sherborough Enterprises enter mediation in order to get a fair result.