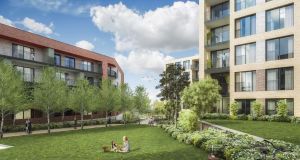 Residents of Cabinteely in south Co Dublin will tonight oppose plans to build 234 new homes, including an eight-storey apartment block, on the former Doyle’s nursery site at Brennanstown Road.

The application has been made to An Bord Pleanála by the Marlet Property Group under Strategic Housing Development legislation, which allows for “fast track” planning decisions.

In May last year, Bord Pleanála granted permission to Marlet to build 26 houses and 89 apartments on the former nursery site.

The current application is in the name of Marlet and Atlas GP Limited and is for a greatly expanded 234-home development, with a mix of apartments and duplexes in three blocks ranging in height from one to eight storeys.

Associated residential facilities include open space, a gym, a creche and a lower foyer.

The proposed development also includes the demolition of an adjacent house “Benoni” and buildings associated with Doyle’s nursery and gardens, on a site of just under two hectares.

Vehicular access to the site and to a new garden centre facility will be from Brennanstown Road.

Dún Laoghaire Rathdown County Council agreed in the context of the 2018 application to allow the developers to widen, realign and resurface the existing Brennanstown Road.

However, local opposition centres around the plans for the road, which homeowners in the area claim is like a winding country lane.

Local resident Michael O’Brien said many of the homes in the area are bungalows and will be exposed to the new eight storey block. “I have a 75 foot tree in my garden and it will be dwarfed by this tower, which will be half the size of Liberty Hall”, he said.

Mr O’Brien said the development, coupled with the current the level of “rat running” between the M50 and the N11, would result in traffic volumes of 10,000 vehicles per day on Brennanstown Road. Other developments were already underway or being planned, which could not be supported by the infrastructure in the area, he said.

Dún Laoghaire Rathdown councillor Cormac Devlin said he was aware of many residents’ concerns about the scale of the proposed development “which many people feel is inappropriate given the suburban nature of the area. At eight storeys tall the apartments would be the highest buildings by far in the area.”

The developers have set up a website, brennanstownroadshd2.ie, which makes available the drawings and planning documents submitted by agents Brock McClure planning consultants. The documents include a note from Brock McClure indicating that Bord Pleanála felt the pre-planning approach created “a reasonable basis for an application for strategic housing development”.

The residents’ meeting will be held in St Brigid’s Parish Hall on Wednesday November 22, at 8pm.