Deported Irish citizens often have no real ties to the country 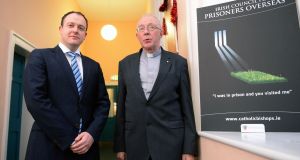 The man stood in the arrivals hall in Dublin Airport, feeling euphoric, but also lost, one of an increasing number of Irish people who are deported back to Ireland after they served prison sentences abroad.

“The world has changed since I went away,” says Paul (not his real name). The past decade has given rise to smartphones, social media and professional online profiles. Paul, who spent nine years in five US prisons, missed it all.

“Facebook wasn’t there before I went away. I’d never seen a smartphone until five months ago. A lot of things have changed since I’ve been away,” he says. “I was sort of caught in a time warp.”

For some, the adjustment is even more acute, according to testimony given at a conference in Dublin Castle marking the 30th anniversary of the Irish Council for Prisoners Overseas (ICPO). Accounts were given of Irish citizens in their 60s and 70s being sent back to Ireland despite having few or no ties to the country.

About a year after he arrived in the US, Paul, who was in his mid-20s, was sentenced to 10 years in prison for a violent crime. A well-educated man, he had never been in a Garda station before.

“I’d never been arrested. This was actually my first time ever being in trouble. I went from being a very well rounded, very well-adjusted citizen to doing 10 years in the American system,” he says.

His first year of incarceration induced a strong sense of paranoia. US prosecutors often seek to make bargains, and a defendant could have a decade or more taken off their sentence by taking the stand against, say, a drug dealer.

As the years went on, things got easier. He was transferred to the federal system and got to know decent people. Each prison change was “very challenging” but he kept himself occupied, doing prison jobs, playing chess, reading and listening to the radio after lockdown.

He got in touch with the ICPO because of the prohibitive cost of phoning his family. At $1 a minute, an hour-long call once a month required money he did not have.

But the ICPO offered more than telephone credit and chess instruction books, though both were sent. Having completed his sentence, he was to be deported immediately. His case worker ensured he did not spend weeks in limbo.

She acted as a character reference and put him in touch with a housing organisation and other agencies back in Dublin. “I wouldn’t have been able to do it by myself,” he says.

For the ICPO, Paul is a success story: he reconnected with his family, found work and is living in supported accommodation. But that is not always the case. About 55 Irish people are deported from foreign countries each year.

Department of Foreign Affairs figures show 161 people have been sent home over the past three years: the three main countries being Australia (62 deportations since 2013), the US (40) and Canada (23).

“When you see someone at Dublin Airport with their jacket in one hand and their deportation papers in the other, and that’s all they have, it’s really quite stark.”

Many of those are young people who got into trouble or whose visas expired, but the ICPO says some are sent back despite having no ties with Ireland. “I met somebody a few months back and he hadn’t lived in Ireland in 30 years,” says Hanley.

The man, who had left in his late teens, had never seen a euro before. “He was coming back here to no one and to nothing. His whole identity was gone because your identity is tied up in your experiences and your people and all his experiences and people were in America,” Hanley says.

The partially-literate man also had significant health problems. The ICPO arranged medical attention and homeless accommodation. However, other deportees inevitably fall through the cracks.