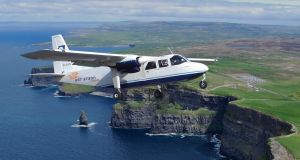 The Department of Culture, Heritage and the Gaeltacht has appointed air transport consultants in an effort to ensure the continuity of flights between Galway and the Aran Islands after December 6th .

The department has also said it remains open to the possibility of purchasing Airport na Mine, also known as Inverin Airport, in Connemara.

Independent Senator Pádraig Ó Céidigh, director of Galway Aviation Services Ltd (GASL) trading as Aer Arann, announced during the summer that he could no longer continue to run the service after that date, due to restrictions on the contract which came into place in 2017 and was due to run till 2020.

Islanders have expressed fears that the loss of the services to Inis Meáin, Inis Mór and Inis Oirr would isolate them and destroy social and business connections here and abroad.

Minister of State for the Islands Sean Canney and his officials had a “useful” meeting with island representatives with regard to the Aran Islands air service on Monday, his department said in a statement.

“Options with regard to the post December 6th period are being fully explored,” it added.

“The Department continues to seek a withdrawal of the termination notices by GASL (trading as Aer Arann). In parallel with this approach, plans are being formulated to have an interim service operating from Shannon Airport from December 7th.

“The Department has engaged the services of aeronautical expertise to assist with the tendering process for such a service. The Department remains open to the possibility of purchasing the Airport at Na Mine, Connemara.”

Protective notice has already been given to the 40 staff at Indreabhán and on the islands following Mr Ó Céidigh’s notice to quit the public service obligation (PSO) contract in December. The three island airstrips are owned by the State.

The 2017-2020 contract covers about 3,500 annual flights between the three Aran Islands and the Connemara airport at Indreabhán. The service has carried 42,000 people annually at peak, but this figure has fallen to just over 30,000 under the latest PSO terms.

The uncertainty over the island service dates back more than three years, when then minister for the Gaeltacht and Islands Joe McHugh had to abandon a tender for a fresh contract which named a helicopter company as preferred bidder. That firm offered to fly from Carnmore airport, on the east side of Galway city.

However, islanders were deeply unhappy about this proposal. They pointed out that Galway Airport at Carnmore was 52km from the ferry port at Ros-a-Mhíl, which provides an alternative when conditions are not suitable for flights. The airport at Indreabhán is just 8km away in south Connemara.

Aer Arann Islands was then selected as the preferred tender under a new contract advertised in April 2016, which stated that Indreabhán must be used. It came into force in 2017.

Aer Arann was established in 1970 and Mr Ó Céidigh bought the company in 1994.