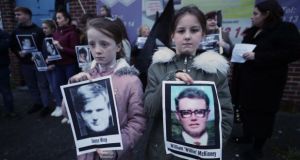 A decision on whether to move the trial of Soldier F from Derry to Belfast has been adjourned for a month to allow the former soldier’s defence team to respond to concerns raised in a letter from a relative of one of the victims.

The former member of the British Army’s Parachute Regiment faces two charges of murder and five of attempted murder in Derry on Bloody Sunday.

Thirteen civilians died when members of the elite regiment opened fire on an anti-internment march on January 30th, 1972. A 14th person died later.

Mickey McKinney, the brother of William McKinney, said he could not see “any reason why this shouldn’t happen in Derry, and all the families feel the same.

Soldier F, he said, “should be brought to this courthouse and tried”.

At an earlier hearing in Bishop Street courthouse in Derry in January, district judge Mr Barney McElholm said that because of security concerns and issues around the suitability of the city’s courthouse he was “afraid Belfast looks like the venue”.

Judge McElholm told the court earlier this month that he had received a letter from James Wray’s brother, Liam, who appealed on behalf of the families of those killed on Bloody Sunday for the trial to be held in Derry.

He said that the relatives and the majority of witnesses were from Derry, and were now of an age where it would be difficult for them to travel to Belfast every day for any trial. He also said that it was important that justice be seen to be done in the city where the murders happened.

Judge McElholm had been expected to rule on the venue on Monday and a number of relatives of those killed on Bloody Sunday were in court for the brief hearing.

Defence QC Mark Mulholland asked for a further adjournment, saying that Soldier F’s defence team had now had an opportunity to consider the content of this correspondence and intended to make submissions in regard to venue. However, he said they needed a little time to address this fully.

Judge McElholm adjourned the case until March 26th, when he said a decision on venue and the exact dates for the Preliminary Inquiry - the next stage of the court process - would be established.

“A lot of work has been going on in the background in regards to assessing the feasibility of different venues with regards to space and the need to accommodate as many people who wish to obviously participate as possible,” he said.

“Those things are not simple,” he said, adding that the submissions of the families and of the defence would be taken into account.