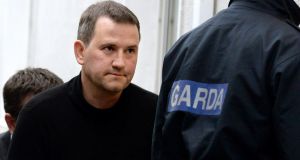 Graham Dwyer: he has denied any connection with certain phones, including the “master” and “slave” phones. Photograph: Cyril Byrne

Graham Dwyer’s prospects of a successful appeal over his murder conviction remain unclear after the Supreme Court ruling.

Dwyer, who has always denied the murder of Elaine O’Hara, was convicted in 2015. His appeal may depend to some extent on the Supreme Court’s final judgment over the validity of a 2011 law under which certain phone metadata was retained and accessed for use at his criminal trial.

That final judgment will not be delivered until the Court of Justice of the EU (CJEU) has pronounced on the EU law issues referred to it by the Supreme Court on Monday. Even if the CJEU fast-tracks the referral it could take six months or more before that court pronounces, after which the Supreme Court will then have to hear submissions in light of the CJEU findings.

All of that suggests a final Supreme Court judgment could take another year to deliver, after which Dwyer’s side have to finalise their grounds of appeal. A hearing date for that appeal, before the Court of Appeal, then has to be obtained.

Some preliminary views by the majority Supreme Court, including concerning exactly when any finding of invalidity of the relevant provisions of the Telecommunications (Retention of Data) Act 2011 should be made, may not be regarded as good news by Dwyer’s side.

The Supreme Court has suggested any such invalidity should not apply to events which occurred before the finding of invalidity was made.

The High Court made its finding in late 2018, and the phone metadata evidence at issue was obtained in 2013 by gardaí investigating O’Hara’s murder.

Dwyer’s lawyers may seek to argue the data was invalidly retained and accessed because the 2011 Act was in turn based on a 2006 directive, which was itself struck down in 2014 by the CJEU.

They may also seek to rely on the Supreme Court’s preliminary view, if upheld in its final judgment, that the Irish data-access regime does not provide adequate safeguards to meet requirements of EU law.

The State could seek to combat any such argument with a number of CJEU decisions and with a 2015 Supreme Court decision, in the DPP v JC case.

The JC judgment provided that, if the State can show that unconstitutionally-obtained evidence was obtained due to inadvertent breach of an accused’s rights, it will still be admitted as evidence against the accused.

During Dwyer’s criminal trial, the trial judge, Judge Tony Hunt, dismissed an application by Dwyer’s side over admissibility of the phone metadata evidence. Dwyer’s grounds of appeal are expected to challenge that ruling, but the nature of any such challenge will be influenced by the final Supreme Court decision on the State’s appeal over the 2011 law.

The State during the Supreme Court appeal hearing stressed the prosecution at Dwyer’s trial had relied not just on the phone evidence but also on other evidence. It submitted the phone data played a “highly significant” role in identifying Dwyer as a suspect in the investigation into O’Hara’s murder and consequently played a role “alongside a significant body of other evidence” in his prosecution and conviction.

The Supreme Court noted some of that other evidence was not the result of access to retained data. It said that other evidence indicated a connection between Dwyer and certain phones, including a phone registered in a false name from which text messages were backed up to O’Hara’s laptop.

However, the Supreme Court also noted the analysis of retained data related to that latter phone, along with two phones referred to as the “master” and “slave” phones, and a phone provided to Dwyer by his employer, was a “significant feature” of the case against Dwyer.

Dwyer has denied any connection with certain phones, including the “master” and “slave” phones. He accepts he can only assert a privacy interest in relation to his own phone, but he argues that all of the retained data was in breach of EU law, and he objects to the use of such data for the purpose of connecting him to the other phones. He also challenges the adequacy of safeguards relating to access of retained phone data.

What all of this means for Dwyer’s appeal is not yet clear, but it is hoped some clarity will emerge from the CJEU and from the final Supreme Court judgment.

What is clear is that there is much at stake, not just for Dwyer but for data privacy rights and the overall investigation and prosecution of serious crime.