Despite fudge and compomise, Foster could not sell language element to her own party 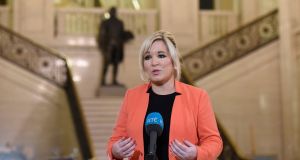 Sinn Féin’s vice-president Michelle O’Neill at Parliament Buildings in Stormont in Belfast on Wednesday. She insisted her party “had an accommodation on all the issues” with the DUP. Photograph: Michael Cooper/PA Wire

All this week, restoring the Northern Executive and Assembly hung on whether Arlene Foster could show leadership and nerve and sell the language element of the deal to her own party and to wider unionism.

If logic were to apply then a deal should have been on. After the crash 13 months ago the DUP and Sinn Féin began five series of negotiations from mutually exclusive positions. Sinn Féin insisted on a standalone Irish language act; the DUP was equally adamant there would be no such free-standing legislation.

Simple reason dictated that squaring that circle required mutual compromise or at the very least some Ulster fudge. From what we know there is both fudge and compromise in the proposed agreement that the DUP walked away from.

That involved an Irish language act which would allow Sinn Féin say it was free-standing legislation. But there also would be two other acts dealing with Ulster Scots and culture which would permit Foster in turn to say the three acts were interlocked and complementary.

But politics as the art of the possible didn’t work with a considerable body of unionism. They just seemed incapable of registering that for the majority of nationalists this wasn’t just about language, it was about mutual respect.

An editorial in the unionist-supporting News Letter on Wednesday accused Mary Lou McDonald of presiding “over a party of wreckers”.

Better to abandon powersharing and local politicians running Northern Ireland than conceding on the language to Sinn Féin or to anyone else, was the editorial’s implicit conclusion. “London again must prepare for British-only direct rule in which there is no increased say for Dublin, which would itself be a major victory for Sinn Féin tactics of the last year.”

During the week arguments were put that the character and culture of Wales and Scotland, with their Welsh and Scots Gallic acts, haven’t been undermined but, regardless, there was quite an atavistic antipathy among many unionists to the language – and it cut across different strands of society.

It wasn’t just Jim Allister of the Traditional Unionist Voice who wielded the wrecking ball. The Queen’s University lodge of the Orange Order – comprised of students, staff and alumni – put up a Facebook post on Monday voicing total opposition to an Irish language act.

“The Unionist community must make it resoundingly clear that no amount of funding for Ulster-Scots, bands or other cultural activities can be accepted in lieu of this act,” Loyal Orange Lodge (LOL) 1845 at Queen’s exhorted. “Quite simply put, there is no price at which the Irish language act can be allowed into law,” it added.

It’s like Sinn Féin taking a gun to the unionist head and saying move forward or else. Protestantism and unionism do not react well to that sort of blackmail

Equally the Queen’s Orange Order members had no truck with the notion of complementary legislation. It added, “Concessions for Ulster-Scots do not hide the fact that an Irish language act will have far-ranging ramifications across civil society. None of which will have a positive impact on the nation.”

Ulster Unionist Party leader Robin Swann and some of his colleagues also made it difficult for Foster and the DUP by opposing an Irish language act and describing it as a “Pandora’s box”.

During the week DUP Assembly members and MPs kept relatively quiet about their feelings but they could feel the heat.

An added problem was that while many might view the proposed agreement as reasonable, it was obvious the DUP leadership had not prepared the unionist base for the deal. All this will raise questions about Foster’s leadership.

One DUP councillor trying to explain why unionists were so antagonistic to an Irish language act explained, “It’s like Sinn Féin taking a gun to the unionist head and saying move forward or else. Protestantism and unionism do not react well to that sort of blackmail.”

After more than a year of deadlock and intermittent negotiations he felt “sectarian divisions” had deepened.

After five series of talks Northern Ireland is left with more division, the prospect of a return to direct rule from Westminster and all the unionist-nationalist rancour and bitterness that will engender

And he warned, “If we don’t get this right we are looking to an incredibly divided province. You often hear people saying we won’t go back to what we had in the Troubles, but I worry that the next generation could slip back.”

One hopes he is being far too pessimistic, but this is a worrying and polarising moment.

It was against this grey, foreboding backdrop that Foster attempted to save the deal. “What we are trying to find is an accommodation and a way forward that values those people who are Irish speakers but doesn’t impinge on the lives of those who aren’t Irish speakers, and I think that’s important,” she said on Tuesday.

That seemed inherent in the deal as we understood it, but Foster was unable to persuade a key unionist constituency of the necessity of a compromise that would be to the benefit of both unionism and nationalism. One Facebook post responding to that Queen’s LOL post declared “Ulster says No”. That’s a position that hasn’t served unionism well and its current hardline stance ultimately will hardly serve it well either as it invigorates the nationalist base.

On Wednesday evening after the crash, Sinn Féin Northern leader Michelle O’Neill insisted her party “had an accommodation on all the issues” with the DUP. Simon Hamilton, a DUP senior negotiator, said what was on offer was “not a fair and balanced package”.

In terms of the blame game, the presence of the Taoiseach Leo Varadkar and British prime minister Theresa May at Stormont on Monday indicated they were also convinced of an imminent deal as described by Sinn Féin.

After five series of talks Northern Ireland is left with more division, the prospect of a return to direct rule from Westminster and all the unionist-nationalist rancour and bitterness that will engender.

Amid all this gloom, recrimination and deadlock, it is sad to record the death of John Robb, the liberal Ballymoney Presbyterian unionist and surgeon and leader of the cross-community New Ireland Group. A speaker of Irish, he had no fear but only love of the language.

Almost 20 years on from the Belfast Agreement that brought such hope, some of his wisdom and spirit of compromise is what Northern Ireland could badly do with now.