Deal may avert strikes planned by teachers for autumn 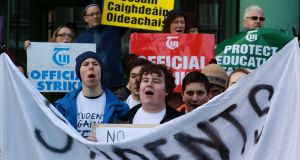 The Teachers’ Union of Ireland (TUI) has reached agreement with the Department of Education which could avert potential industrial action by its members in schools in the autumn.

If the deal is accepted in a forthcoming ballot, members of the TUI would be considered as being covered by the Lansdowne Road agreement and would not face potential financial penalties being imposed on them, such as the loss of increments, from July.

However, TUI members will also vote separately on industrial action, including strikes, if the agreement is rejected.

Members of the TUI had previously rejected the Lansdowne Road accord which was negotiated last year.

The previous Haddington Road agreement, which provided protections for teachers , is scheduled to expire at the end of June. New financial emergency legislation put in place last autumn would have allowed the Government to withhold incremental pay increase and new supervision and substitution payments due this year to groups considered to have repudiated a collective agreement.

The TUI has told members that in effect acceptance of the proposed agreement reached with the Department of Education would mean members of the union “would continue to co-operate with and not to repudiate the relevant collective agreements”.

“In summary, if the proposal is accepted, TUI members will be covered by the Landowne Road agreement from 1st July, 2016.”

The new deal covers issues such as lecturing workload in Institutes of Technology, casualisation and the use of the controversial additional 33 hours originally put in place under the former Croke Park agreement.

The TUI said a separate deal reached between the former government and firefighters last week, which provided for the restoration of allowances cut for new employees in 2012 in certain circumstances , set a precedent that could be followed by new entrant teachers.

“The executive committee has also decided in relation to a concurrent ballot, to recommend that, in the event that the proposed Department of Education and Skills/TUI agreement is not accepted, members vote to engage in industrial action, up to and including strike action, and encompassing withdrawal from productivity commitments which arose under the Croke Park agreement and the Haddington Road agreement.”

“A ballot of members on this proposed agreement will take place before the end of May with ballot papers issuing next week.”