Ann O’Donoghue’s disappearance has ‘bamboozled’ and alarmed her family 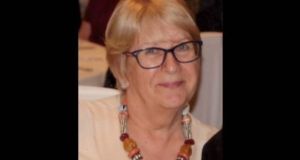 The daughter of a missing Donegal woman has said the family is very worried about her disappearance as it is completely out of character.

Ann O’Donoghue, 68, a retired dentist who lived in the Annagry area of the Gweedore Gaeltacht, was last seen at 5.30pm on Tuesday.

She left an “unusual text” on her mobile phone which worried her husband John who is currently in hospital, according to her daughter Alice Flanagan.

Ms O’Donoghue took her mobile phone, keys, purse and her debit cards with her, but left her dog Murphy at home.

Her car was located near the Ballyshannon area in the south of the county, but there has been no sign of her.

Ms Flanagan said her mother had never done anything like this before and had no underlying mental health issues.

She said her disappearance had “bamboozled the family” and the content of the text message, which she did not want to disclose, was also out of character.

She was a very fit and healthy woman who walked seven kilometres with her dog every day sometimes over bogs and beach terrain.

“She was enjoying her retirement and figuring out what to do with her time,” Ms Flanagan added.

She told the Ray D’Arcy Show: “Mum if you’re able to hear this - we’re all here waiting for you to come home, we miss you and we love you and even if you don’t feel like calling us send a text to let us know you’re okay.

“And Murphy your little dog is here and he’s dying to go for a walk. And we want you to come home safe.”

Ms Flanagan said her mother had taken the lockdown seriously as her husband, who is receiving treatment in hospital for a medical condition, has underlying health issues.

“She didn’t leave the house really for 14 weeks or she barely left the house. She has made a few trips for the groceries in the last couple of weeks,” she said.

She stressed that her father “can’t make head nor tail of it”.

“ It makes no sense to us. We think that it’s just everything, that the walls started to come in around her and she just felt the need to break out and hopefully she’s booked in somewhere for a couple of days and she’ll come home.”

She is described as being 5’2”, with blonde shoulder length hair and of slim build.