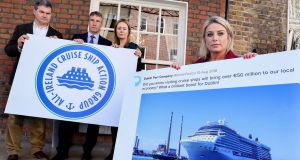 A decision to cut back on the number of cruise liners in Dublin Port could “devastate Irish tourism”, a campaign group to oppose the move has claimed.

The All-Ireland Cruise Ship Action Group campaign, launched on Thursday, aims to challenge the move, with businesses in the tourism, retail and transport sectors warning that the measure will have a “catastrophic” impact.

Dublin Port recently said it planned to cap the number of cruise ships that can dock there at 160 this year and 140 in 2020. Between 2021 and2023 it will limit the number to around 80 after which it will start expanding capacity again.

It has said it is taking the step to ensure it can handle increased volumes of freight, particularly as more ships will come direct from the continent after the UK leaves the EU.

But Niamh McCarthy, spokeswoman for the campaign group and chief executive of Excursions Ireland, said the decision would “devastate Irish tourism and is driving a death nail into our business”.

She said last year, cruise ships brought over 442,000 visitors to Ireland and generated over €50 million for the economy.

“If Dublin Port is allowed to go ahead with its plan, all of this will be lost forever.”

She called on the Government and the Minister for Transport, Tourism and Sport to take immediate action.

“For the past ten years, the Dublin Port Company have played an Important role by increasing the numbers of cruise ships docking in Dublin and were at the forefront of highlighting their benefit to the Irish economy,” she said.

“Dublin Port have performed a complete sea change, to everyone’s amazement. Their latest damaging strategy has come out of nowhere and will risk the many thousands of jobs in Ireland dependent on the sector.”

She said the sudden change in policy was “a total shock to both the all-Ireland tourism sector and its international stakeholders”.

Feargal Barton of Barton’s Transport said the move would have a “catastrophic impact” on Ireland’s other port cities of Belfast, Cork and Waterford.

Ms McCarthy pointed out that cruise companies arrange cruises and marketing plans at least two years in advance and said fears over what the impact of the Dublin Port would have had seen some major companies questioning the merit of including Dublin as one of their stopovers.

Richard Guiney of Dublin Town, an organisation which represents some businesses in the capital, called for clarity from Dublin Port.

“It would appear that Ireland’s reputation has been damaged in important international tourism circles by the manner in which this matter was handled. This needs to be resolved. If there was certainty and belief regarding the port’s intentions that would go a long way to calming nerves.”

1 Brazilian father to be deported days after daughter’s birthday
2 Coronavirus: Austria stops train services with Italy to contain spread
3 What evidence is there that the IRA still controls Sinn Féin?
4 Clare houses surrounded by water evacuated as rainfall warning
5 Maureen Dowd: For the White House parasite, all restraint has gone
Real news has value SUBSCRIBE