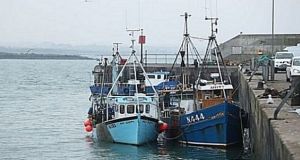 A file image of two Northern fishing boats seized by the Naval Service for fishing in an exclusion zone off the State’s coast. File photograph: Niall Carson/PA

Lawyers for fishermen who won a Supreme Court case over access by Northern Ireland vessels to Irish waters have written to President Michael D Higgins asking him to refer legislation restoring that access to the Judiciary.

On Thursday the Dáil overwhelmingly backed a Bill restoring access for Northern Ireland fishing vessels to the an exclusive six mile (9.6 km) zone off the State’s coast.

Killarney-based solicitors O’Shea, White and Company have written to Mr Higgins expressing “grave reservations” about the decision by the Dáil and Seanad to pass the Sea Fisheries (Amendment) Bill.

They have also written to EU Commissioner for Maritime Affairs and Fisheries Karmenu Vella with concern that the legislation was passed without understanding of the real impact on the fishing industry in Ireland.

Mr Kelly, who began a hunger strike in protest at the Bill, demonstrated outside Leinster House this week while the legislation was being debated in both the Seanad and Dáil.

The Sea Fisheries (Amendment) Bill - backed by 72 votes to eight - reinstates the voisinage (informal neighbourhood) arrangement that was in place from 1965 to 2016 between Northern Ireland and the Republic where fishermen from both areas could access the zone from the coast to six miles out to sea.

Access for boats from the North ended in 2016 following the successful legal action by the four mussel seed fishermen.

The Supreme Court ruled that the voisinage agreement had no legal basis and the legislation aimed to provide that requirement.

The legislation languished in the Seanad for two years until the recent detention of two Northern Ireland boats by the Naval Service, which prompted the DUP to claim the Irish Government was imposing a”sea border” while insisting it wanted an open land border.

The claims put pressure on the Government to pass the legislation reinstating Northern access.

But Minister for the Marine Michael Creed said the legislation was not about fisheries management issues and should not be seen as an opportunity to regulate individual fishing activities.

“ It is not a panacea for every ill in the fishing industry. It seeks only to establish the principle of access or, more correctly, to reinstate it,” he said.

The legislation now goes to the President for consideration.

He said Fine Gael idol Michael Collins would be “turning in his grave” to hear his namesake, a fellow Corkman, “shutting the doors” on access to Irish waters by Northern Ireland vessels.

Mr Collins had called for more time to consider the legislation. He said Irish fishermen were losing out to other countries on EU fishing directives and “this Government is already selling out our greatest national resource”.

But Mr Creed said “the sound of doors slamming on our Northern Ireland counterparts would make another west Cork man and the Deputy’s namesake spin in his grave.

“I have no doubt he would be spinning in his grave in response to that particular contribution.”

Mr Collins told the Minister: “You had the doors shut solid on this and there was no any chance of any discussion for me or my colleagues. So please don’t go there because you are the person who shut the doors, not me.”

Sinn Féin Kerry TD Martin Ferris expressed surprise that Mr Collins “a man from rebel-held West Cork” would be partitionist after the Independent TD introduced an amendment which would have the effect of removing access to vessels from the north to Irish waters.

Mr Ferris said the amendments were “partitionist in the extreme, given that they seek to preclude a basic right from people of our country to fish in our territorial waters around the island”.

The Minister said that “regardless of Brexit or anything else in the context of the Good Friday Agreement and in the context of harmonious relationships North and South, it is only right and proper that we would restore that reciprocal arrangement. “Restore” means just that. That is what the Bill is for, not any other purpose.”