In an area ravaged by drugs and gangs, coronavirus adds to the problems 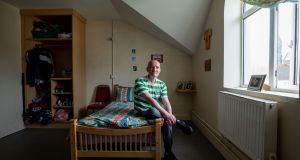 David Mulcahy, a resident of McGarry House in Moyross, Limerick: ‘I have a friend here and I always go to his room, but to be honest with you, I don’t like to now, because he suffers from asthma.’ Photograph: Alan Place

Breda and Kevin Devereux, along with their six children, and two grandchildren, live cramped lives in their three-bedroom council house in Moyross in Limerick.

This month, the family anxiously waited for 23 days for the result of a Covid-19 test carried out on Kevin, after he began to show possible symptoms.

Quarantine during the month was impossible. “I have kids and grandkids here. I’d no room to put him in – I’d no room whether he had it or not,” says his wife.

“I have an 11-year old, he’s in my room with his bed and wardrobe, and my bed. He’s on top of us,” she says, while a space has been cornered off in the kitchen for another child.

“Every time the phone rang, [Kevin] was panicking. He’s nervous, he’s had two or three heart attacks already, and I’ve high blood pressure and asthma,” she goes on.

The story is a familiar one in Moyross, which, along with St Mary’s Park, Ballinacurra Weston and Southill, has been undergoing a Government-backed regeneration plan for more than a decade, one that has happened in fits and starts.

Drug gangs which once ruled through fear were toppled by gardaí backed by tougher anti-gangland legislation. However, the fallout from feuds lingers.

Regeneration has brought progress, but unintended consequences, too. Hundreds of dilapidated homes have been demolished, but a far fewer number have been built.

Overcrowding is common. Three and four generations of families sleep wherever they can – on couches, floors, bunk beds, buggies and cots, community leaders complain.

Sandwiched into their three-bedroom home, 10 members of the Chaddad family, including parents Bridie (45) and Driss (48), five children, two grandchildren and a son-in-law, struggled during the opening stages of Covid-19.

One of the daughters, along with her partner and their two children, was eventually found alternative accommodation through Limerick City and County Council to ease the burden.

A pressure cooker isn’t the word for it. We could be isolated for the next six or seven weeks

“They were living here for nearly 11 months. It was a struggle. We bought bunk beds and we had them in the sittingroom,” says Bridie Chaddad. “It was very hard in the mornings trying to get them all up for school with only one bathroom, and one cooker, but it had to be done.”

Like many others in Moyross, Bridie Chaddad has a plethora of underlying conditions, including “angina, diabetes, high blood pressure and COPD” (chronic obstructive pulmonary disease).

“I’m afraid I’ll get it. God forbid one of us gets it, but we are following all the rules,” she declares, insisting that her family “haven’t been outside the door in four weeks” since the lockdown began.

One daughter is studying for her Leaving Certificate. She’s “a nervous wreck, because of everything being up in a heap”, says her mother. Another has exams in a year’s time.

Family tensions, just like anywhere else, occur. “A pressure cooker isn’t the word for it. We could be isolated for the next six or seven weeks.”

Family bingo games help, sometimes. “The self-isolation is very bad for our mental health. I am struggling, I’ve nothing to be ashamed of, we are struggling,” Chaddad continues.

Elsewhere in Moyross, Anthony Quinn, a special needs assistant student, struggles to study for his college exams in a three-bedroom house, along with nine other relatives including his parents, three brothers, two sisters and a sister’s partner. A cousin, who was in the house when the lockdown was announced, stayed when it was decided it was safer to stay put.

“It’s crowded. I’m trying to concentrate but I can’t. It’s hard to study, but I’ll just have to try and deal with it,” says the 25-year-old.

Years of drug-dealing, shootings, arsons, domestic violence and antisocial behaviour have all left lasting physical and emotional scars on families throughout Moyross.

Your mind wanders, and the last thing you want to think about is using or drinking

Local mother-of-one Kim Tierney self-medicated to try to numb the pain of sexual and physical abuse.

Now in recovery, she tells The Irish Times how Covid-19 threatens to undo her progress.

“Normally I could get to between three and six meetings a week, plus a counselling session. It’s a real help and it sets off my day,” she says.

Tierney longs for the connection felt during past gatherings.

“It’s just not the same connection as when you go into a room and hear someone’s story and you hear someone share.”

Spending more time in her one-bedroom house, which she shares with her beloved nine-year old daughter Kieva, has triggered memories from days she prefers to forget.

“When you’re in home all the time, your mind wanders, and the last thing you want to think about is using or drinking, but it crosses your mind so much more when you’re not kept busy.

“This disease is on your shoulder saying, ‘no one is looking, no one is around, you can get away with it,’ but your head knows, your mind knows,” she goes on.

Nevertheless, she remains hopeful. The garden shed has been turned into a playhouse.

“We are playing board games and cards, anything really to keep my mind busy. It’s like, ‘What can we find fun to do today, what memories can we make?’ It’s a completely different way of thinking,” she tells The Irish Times.

David Mulcahy (40) left Moyross for England when he was 16, after his parents separated. Later, he became a heroin addict. Coming back, he became homeless after his rent increased.

With help, he came off heroin 2½ years ago. Today, he is one of 67 residents living in the Novas-run McGarry House.

“I was on 90ml of methadone but now I’m only on 25ml, I’m doing fantastic,” he says. However, Covid-19 has left its impact on all those in McGarry House, too.

Face-to-face support meetings have stopped, but telephone encounters continue. Residents can spend up to 15 minutes in each other’s rooms, two metres apart.

“I have a friend here and I always go to his room, but to be honest with you, I don’t like to now, because he suffers from asthma,” says Mulcahy.

“A lot of the residents are quite anxious and they are quite scared,” says Sinead Carey, manager of McGarry House, who has encouraged her charges to write down their feelings.

Mulcahy was one of those who did write. “I wrote him a letter back, so we are finding new (old) ways of communicating around how residents are feeling,” she says.

The new normal has “completely transformed” McGarry’s operations, explains Novas head of policy and communications Una Burns. Couches, chairs and tables have been removed from the centre’s recreation and diningrooms, where residents once congregated. Self-isolation, though, poses “increased risks”.

“If they use drugs alone, overdose risk increases. All the other risks that exist [normally] don’t go away just because of Covid-19,” she adds.

Normally, McGarry House gathers its people together at times when spirits need to be lifted. “Now, we can’t do that, [but] we are still trying to make sure that residents still feel connected.”

Some residents are traumatised by past experiences, says Burns. “It can be very triggering to be locked in a room for weeks on end.”

Tiernan O’Neill, principal of the local primary school, Corpus Christi, fears that Moyross’s progress in recent years could be halted or even reversed by Covid-19.

The lack of broadband and laptops is creating a “digital divide” between affluent areas and some of his charges in Corpus Christi, he says.

“[Some] kids just aren’t able to engage,” O’Neill explains. “In a lot of the homes, if you are dealing with homelessness and addiction, education is way down the pecking order.”

Fifty or more students are due to leave primary school this summer.

“But the reality is, potentially these kids may not be in school for months if the pandemic continues,” he says.

Some of his 350 children continue to get school-provided meals, through the services of provider Carambola, which is now offering parcels of non-perishable food. O’Neill worries about the lasting psychological wounds that Covid-19 might leave behind on his pupils. “For [some], school is their safe place, it’s their oasis.”

Some children moving up to secondary grades will fall behind disproportionately.

A State post-Covid recovery plan will come, accepts Moyross parish priest Fr Pat Hogan, but he fears that places such as Moyross will be left behind.

“Before, there were opportunities out there, but I reckon that’s gone now,” he says, adding that local children could fall under the influence of dealers while the schools stay closed.

“If you don’t look after every place, no place is safe. It’s the same thing with drugs, inequality and injustice – in the poorer parts of all the cities, it always comes home to bite you,” Fr Hogan warns.

Some help has come from Limerick City and County Council, which has approved interim payments of €10,000 for community meals-on-wheels groups.

Meanwhile, the Northside Family Resource Centre in Ballynanty, which has had to lay off more than 60 staff and has closed its creche, still supplies meals and a “friendly call” service to 150 senior citizens and 90 families.

Displaying the scale of issues that must be considered, the centre is giving out contraception to people who might be unable to get it because of the travel restrictions.

Young people, “many just 16”, had problems getting condoms and contacted the centre in search of contraception, the centre’s CEO Ciara Kane says. Each pack, which is either delivered or handed out, includes guidance that they should only have intercourse with someone who is already part of their household unit.

Despite local complaints about the number of houses, the council says it gave permits to construction workers to work despite the restrictions to open up vacant properties.

Aoife Duke, director of housing development at Limerick City and County Council, says the initial concentration had to be on demolitions.

The new builds will reduce overcrowding. “We have approval for rebuilding of houses or new developments, pockets of those are already in place,” Duke says.

“We actually have a demand for housing from people who want to move back to the likes of Moyross. We should see a relief of the pent-up pressure that is brought about from larger numbers living in houses.”