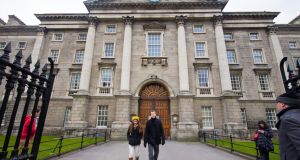 The front of Trinity College Dublin has been under manicured lawns for at least 150 years. Photograph: iStock

Trinity College Dublin’s manicured front lawns are to be transformed into a bee-friendly wild-flower meadow after the public overwhelmingly backed the move.

The college is set to announce on Friday that following an online poll which attracted almost 14,000 votes, the vast majority – 12,500 – voted in favour of replanting the front of the university which faces on to College Green.

Prof John Parnell, chair of Trinity’s grounds and gardens committee, said the results have sent a message that “people want to see more biodiversity and in particular want institutions to set an example” .

Though the area may end up looking less tidy, supporters of the idea say it will be an important reminder of what wild nature looks like.

Research shows lawn-mowing, ground preparation and pesticide control can disturb important insects that feed and nest in the soil.

By contrast, planting wild flowers and minimising interference can support biodiversity, and provide a habitat for native insects and food for pollinators in the city centre.

Prof Parnell said the plants would most likely be a mix of annuals and perennials, with as many of them being of known Irish origin as possible. The aim was to extend flowering over as long a period as possible.

The area will flower in spring and summer, and be left untouched over the winter months when pollinator insects – such as butterflies, hoverflies and bees – hibernate.

The college says it has no date yet for when planting will begin due to public health restrictions, but will commence work when Government guidelines allow.

The move represents a pioneering attempt in Ireland to place wild-flower spaces in the heart of the city. The area – one of the most prominent areas in the capital – is the grass outside the university’s front gate where statues of Oliver Goldsmith and Edmund Burke stand and thousands pass by on a daily basis.

Trinity says the plan is part of the university’s response to Ireland’s “biodiversity crisis”.

Prof Parnell said the area in question was very formal in layout, and has for at least 150 years been under grass.

“To change it will send out a strong signal that Trinity College Dublin is not bound by the past but engaged with the future. We look forward to all this project will bring in the future.”

Trinity has already converted large sections of its campus to wild-flower meadows, providing a place to rest, live and feed for insects last year.