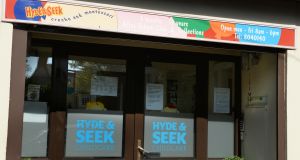 Minister for Finance Paschal Donohoe recently met with Hyde & Seek creche chain management and is “keen to help as much as possible”, parents were told in a recent email from the company.

Mr Donohoe met management and parents who had children in the creche at the company’s Glasnevin creche last Friday.

A spokeswoman for Mr Donohoe confirmed he attended the meeting and said “the Minister is working to support the parents”.

In a recent email to parents from Hyde & Seek management, the company said the two politicians “were keen to help as much as possible.”

The affected creches are located on Tolka Road, Shaw Street, Glasnevin, and Millbourne Avenue. The closure order would come into effect on December 31st but the company is appealing the decision.

In the recent email the company asked parents to consider writing letters of support for the creche which would be used in the de-registration appeals process.

On Thursday, parents with children in Hyde & Seek creches delivered a petition to Minister for Children Katherine Zappone calling for her to “initiate urgent mediation” between Tusla and the creche management.

The petition, which the company said had been signed by over 100 parents, called for a meeting “in order to facilitate circumstances to arise whereby the creches can remain open”.