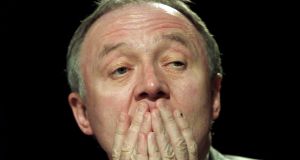 Then Labour MP Ken Livingstone invited members of Sinn Féin to the House of Commons in 1996. Photograph Dylan Martinez/Reuters

Concerns were raised at a cabinet meeting of the British government after people with connections to the IRA were invited into the House of Commons and left unattended in 1996.

New documents released by the National Archives in London show there were calls for an inquiry after several Labour MPs, amongst them Ken Livingstone, had invited in the guests who were identified by a police officer on duty.

“If allegations were true, they raised serious questions about security in the Palace of Westminster, which would be of concern both to MPs and to parliamentary staff, and suggested a highly irresponsible approach by the members concerned,” said the memo from the cabinet meeting in November 1996.

“There was a case for some form of inquiry,” it added.

“MPs could not be expected to know whether members of Sinn Féin whom they invited to parliament had connections with the PIRA [Provisional IRA], but this raised questions about the wisdom of inviting such people,” the memo advised.

“Similar issues had arisen when Mr Jeremy Corbyn MP had invited Mr Gerry Adams, the president of Sinn Féin, to the House, but the visit had in the event not taken place.”

A member of the police told the sergeant of arms, who is responsible for keeping order in the House of Commons, that there were people who were known to the security services present.

The memo says the MPs who invited them in “left them unattended for some time”.

Prime minister John Major also said there was reason to believe that people with IRA connections had visited the House of Commons.