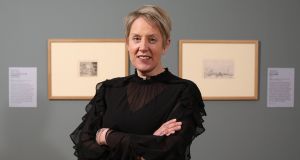 National Museums NI chief executive Kathryn Thomson with etchings by Rembrandt of The Adoration of the Shepherds (left) and Six’s Bridge, which are now on display at the Ulster Museum. Photograph: Darren Kidd/National Museums NI/PA Wire. 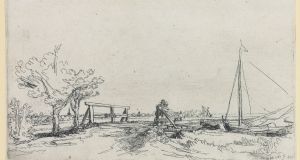 An etching by Rembrandt called Six’s Bridge, which is on display at the Ulster Museum. Photograph: Darren Kidd/National Museums NI/PA Wire. 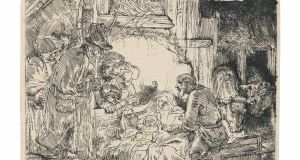 An etching by Rembrandt called The Adoration of the Shepherds which is on display at the Ulster Museum. Photograph: Darren Kidd/National Museums NI/PA Wire.

A deal struck over an outstanding tax bill has landed a Northern Irish museum six works by Dutch master Rembrandt.

The Ulster Museum is the beneficiary of an agreement negotiated by the tax authorities to secure £150,000 (€175,945) owed to the exchequer. The six etchings are the first works by Rembrandt to be acquired by a museum in the North.

The museum has put two of the etchings on display — Six’s Bridge and The Adoration Of The Shepherds — as part of its current Masterpieces of Dutch Landscapes Painting exhibition. It will be displaying the other four shortly.

The pieces, dating from 1630s to the 1650s, were gifted to the museum by the Arts Council England as part of the UK government’s Acceptance in Lieu scheme, which allows individuals to settle inheritance tax bills by handing over valuable artworks to the authorities.

“This gift immeasurably transforms the Ulster Museum collection, as these are the first works by Rembrandt to enter a public collection in Northern Ireland,” she said.

“We are so excited for the opportunity for our visitors, from here and further afield, to see the work of one of the world’s most celebrated artists in Belfast.”

As well as the two etchings already displayed, the museum has also acquired: Bearded Man In A Furred Cap And Robe; The Artist’s Mother; The Sleeping Herdsman; and The Descent From The Cross By Torchlight.

Christie’s auctioneers were involved in the negotiations that resulted in the artwork being acquired.

UK culture secretary Nicky Morgan said “Rembrandt is one of history’s most celebrated artists” and that it was “fantastic news” that the pieces were going to the Ulster Museum. – PA