Some 10,000 vaccines will be given to those in this category initially says Paul Reid 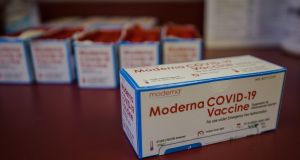 The Health Service Executive (HSE) will this week start the vaccination of people between ages 16 and 69 with serious illnesses, chief executive Paul Reid said on Sunday.

He said about 10,000 people in this category will get the Covid-19 vaccine as part of the initial process this week.

Mr Reid said overall there could be a very high number of people in the serious illness categor – potentially up to 150,000. He said the HSE had started a process of identifying the individuals concerned.

Mr Reid said in the coming week the HSE would begin administering about 10,000 vaccines to people who fall into the very-high-risk category.

“In essence in the first week it will be people with intellectual/neurological issues, particularly in disability homes and settings.”

However, Mr Reid said that in parallel the HSE was working through a clear list of the key chronic illnesses such as cancer and those relating to kidney, lung, neurological and obesity issues.

The HSE chief told RTÉ’s “This Week” programme on Sunday that overall the three current vaccine providers had given commitments to supply collectively 1.2 million doses by the end of the first quarter.

However, he said about 200,000 doses were scheduled to arrive on the final day or so of the month.

The HSE advised family doctors this weekend they may not receive all the supply anticipated for patients in the over-80 age cohort this week. This is due to changes in the supply line of the Moderna vaccine.

However, the HSE maintained the shortfall will be made up in the weeks ahead.

The HSE told GPs on Saturday night it was still expected the vaccination of all people in the community aged over 70 would be completed on schedule by mid May.

The HSE said due to a reprofiling of the Moderna vaccine delivery schedule, the total vaccine doses available for distribution in the coming weeks was “now slightly less than previously advised”.

“ The available vaccine supply is approximately 15 per cent less than the required amount to meet the total over-80 cohort. This means you may not receive the total order for these coming weeks but, in all instances, the amount you are to receive will be advised to you and any shortfall in vaccine for the over-80 age group will be allocated in your next order and so on through March with a significant ramp-up in vaccine delivery in April as increased supplies arrive in Ireland.

“Unfortunately, these supply issues are outside of our control. However, if any additional supply becomes available, this will be provided to you at the earliest opportunity,” the HSE said.

The HSE said more than 1,300 GP practices representing in excess of 3,000 family doctors and and their teams had now received their first delivery “which has ensured that the vast majority of 72,000 over 85-year-olds will have been administered with the first dose”.

“ In addition, with the expert management of vaccine supplies, use of Moderna and some second deliveries, GPs have already vaccinated a significant number of those in the 80 to 84 age cohort. We are now moving into the next phase of the programme and we expect that in all nearly 95,000 doses will have been administered by the end of this week (W/c 1st March) with a further 37,000 being distributed in the coming week (W/c 8th March).”

The HSE said there were “a very small number of practices, now less than 30, who are due to receive first delivery next week for their over 85s”. It said it was also intended to start the vaccination of those who are homebound and in acute hospitals.

Elsewhere Northern Ireland frst Minister Arlene Foster said there is set to be an issue with different levels of vaccination across Ireland.

Mrs Foster said she believes UK prime minister Boris Johnson should have a conversation with Irish premier Micheal Martin about the possibility of surplus vaccines being given to the Republic. Mrs Foster said it is her desire that everyone on the island is vaccinated as quickly as possible. She blamed the “inflexibility of the EU” for the differential.

Northern Ireland started its vaccine rollout earlier than the Republic as part of the UK programme. The UK became the first country in the world to approve the Pfizer jab, with the first vaccinations administered on December 8th.

Ireland is part of an EU rollout and had to wait until the EU approved jabs. Its first vaccinations were administered almost a month later on December 29th. Mrs Foster said 40 per cent of the population in Northern

Ireland have had their first dose of the jab and said she is alarmed by the figures in the Republic. “There will have to be conversations about how we move forward in this,” she told RTE Radio’s This Week programme. “Obviously we will be taking advice from our Chief Medical Officer (Dr Michael McBride) as to what are the best ways forward, but it is my desire of course, as a neighbour, to see everyone vaccinated on the island of Ireland and I very hope much that the vaccine programme in the Republic does pick up pace because it’s important that if people are coming and travelling across the border that they are vaccinated, but also for the population of the Republic as well.”

Mrs Foster said Dr McBride has made it clear that if a lot of people are coming to Northern Ireland who are not vaccinated it “could have an impact on the efficacy” of the vaccine on those who have received it. She said that so far Stormont has advised people to be sensible rather than issue a ban on crossing the border. “That’s something we haven’t done unlike the Republic, we have never had that rule, we have tried to say to people to be sensible and not move between different jurisdictions during the different lockdowns,” she said. “But I think we want to take advice from our medical experts on all of these issues.” –Additional Reporting PA