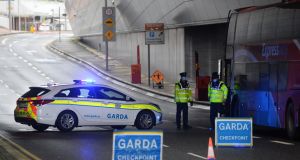 A Garda at a checkpoint in Dublin Airport during Covid-19 lockdown.Photograph: Dara Mac Dónaill

New legislation to enforce mandatory State quarantine in hotels for passengers from high-risk countries has been signed into law by the president.

“Having considered the Health (Amendment) Bill 2021 the President has signed the Bill and it has accordingly become law,” a statement from the office of President Michael D Higgins said.

However the first arrivals into the hotels are unlikely until at least the middle of the month as the Government is still trying to work through final operational hurdles.

The hotel isolation measures will apply to 33 countries currently on the “category 2” list from where the risk of transmission of Covid-19 or mutations of the disease is high.

Minister for Health Stephen Donnelly said the next step was to finalise and sign a contract withh a service provider “I anticipate this would happen shortly” he said in a statement welcoming the news of the Bill’s signing.

“The Health (Amendment) Act 2021 is another important element of Ireland’s defence against Covid-19 and I welcome today’s news that it has become law. The operationalisation of designated quarantine facilities is being advanced on a cross-departmental basis as a matter of priority.”

The Department of Health is leading the implementation of quarantine supported by a number of Departments and agencies including Foreign Affairs, Transport, Justice, Public Expenditure and Reform, as well as Children, Equality, Disability, Integration and Youth, the Defence Forces, as well as via input from the private sector, the statement added.

The most complicated aspects of the system centre around the private security staff to be used by the hotels to police the quarantine, arrangements around physical exercise and food delivery to rooms, and the frequency of testing for hotel and other staff managing the system of quarantine.

It is understood that gardaí will be called to hotels if those staying do not comply with the rules or leave the facility before they are allowed to.

Senior Garda management have informed the Government that the force should not be on site at the facilities and should not have a role in escorting passengers from planes and ports to the hotels.

Mr Donnelly told the Seanad last week that “the measures provided for in the Bill will be applicable to all travellers from a designated state and a person’s nationality has no bearing on the matter”. He said the measures were proportionate.