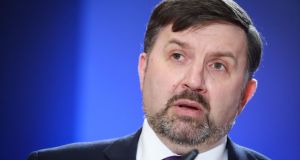 Northern Ireland’s Minister for Health Robin Swann defended the decision not to include indicative dates in the North’s plan to emerge from lockdown . Photograph: Kelvin Boyes/Press Eye/PA Wire

Plans to scale up the vaccination programme in the North are being finalised this week, Northern Ireland’s Minister for Health said on Wednesday.

Robin Swann told reporters at a press briefing that supplies of the Oxford/AstraZeneca vaccine were “scheduled to increase very significantly” in the coming weeks and the programme for inoculations would be “scaled up accordingly”.

Mr Swann said he hoped the mass vaccination centre planned for the SSE Arena in Belfast would open by March 31st, and depending on the supply of the vaccine up to 40,000 vaccinations per week could be delivered at that site.

According to the latest figures from the North’s Department of Health, published on Wednesday, 582,881 vaccines have been administered, of which 545,019 are first doses.

Vaccination slots are now being offered to 60 to 64-year-olds, and the head of the North’s vaccination programme, Patricia Donnelly, said the scheme was now “significantly ahead” of its original schedule.

Mr Swann also defended the decision not to include indicative dates in the North’s plan to emerge from lockdown.

The Northern Executive’s Pathway to Recovery document, which was published earlier this week, maps a return to some normality over five phases in nine areas but does not include a timetable.

He said he totally understood people’s “frustration” that Northern Ireland could not move faster out of lockdown, or “be more definite about the pathway ... I would rather maintain a steady pace than charge for the exit door and then fall over.

“The time for definite dates will come ... but some of those demanding a calendar-led approach now would be the first to complain if we gave them dates and then had to alter them because of the pandemic.

“The virus as we know is not predictable ... there are too many complexities and uncertainties, and I will not offer people false assurance,” he said.

The department announced the deaths of four more people with Covid-19 in Northern Ireland on Wednesday, bringing the total number of deaths to 2,063.

A further 226 people tested positive for the virus, and 307 patients with coronavirus were receiving hospital treatment.

Dr McBride said that the number of Covid-positive hospital admissions, inpatients with Covid-19 and the number in intensive care was continuing to fall as a result of people’s efforts and was the “beginning of a welcome respite for our hard-pressed health and care workers.”

Employees in Northern Ireland will also benefit from the extension of the UK government’s job retention “furlough” scheme and support measures for self-employed workers which were announced by the British Chancellor as part of the Budget on Wednesday.

A total of £411.9 million (€476 million) was allocated to Northern Ireland, the majority of which is to pay for the response to Covid-19.

The North’s Minister for Finance, Conor Murphy, said that while the extension of these schemes was welcome, it was “disappointing” that there was “no extra capital money to spur economic recovery.”

Vaccine rollout to be ‘reset, not revamped’ after AstraZeneca decision – Reid

5 ‘He’ll be missed’: Locals turn out to say goodbye to popular shopkeeper