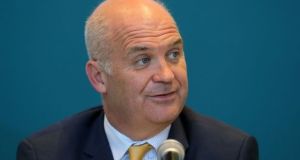 The meeting is being chaired by the Chief Medical Officer, Dr Tony Holohan, who has returned from an extended period of leave. Photograph: PA

The National Health Emergency Team has tonight recommended the State be moved to Level 5 restrictions for a period of four weeks to curb a sharp rise in Covid-19 cases.

Such a move would have serious economic and societal implications, and has taken the Government by surprise.

The Cabinet has yet to discuss such a significant escalation in restrictions. At the moment most counties are at Level 2, with the exception of Dublin and Donegal, which are at Level 3.

It remains to be seen whether the NPHET recommendations will be adopted, or whether there will be pushback at Government level.

It is understood a meeting of NPHET earlier on Sunday decided enhanced measures were required due to serious concern at the rate of spread of the virus.

Senior health sources said members of NPHET were “very worried” by recent trends in the growth of the virus.

The team was concerned by the trajectory of the virus across all metrics that it measures, including the five-day, week-long and 14-day incidence rate.

“Everything is going in one direction,” the source said.

The NPHET meeting was arranged at short notice on Saturday in light of deteriorating case numbers across the board. Some 613 new cases were reported on Saturday.

While the NPHET advice was shared with the Government this evening, a letter formally setting out their position is likely to be sent tonight or tomorrow by the Chief Medical Officer, Dr Tony Holohan, who returned from an extended period of leave taken for personal reasons to chair today’s meeting.

Level 5 restrictions will see people asked to stay home except when exercising within five kilometres of their home; no visitors to their home, no social gatherings other than funerals or weddings, so called wet pubs must close, unless they can offer a takeaway service.

What is in each of the five levels? VIEW NOW
Coronavirus Data Dashboard

However, all educational facilities, including schools, creches and universities will remain open. At the moment, third level colleges are at level three restrictions and tuition has been moved online where possible.

The Government will then have to assess the NPHET advice. This process may involve input from the senior group of officials led by Martin Fraser, the most senior civil servant in the Department of the Taoiseach, and the Cabinet Covid subcommittee.

Earlier, Government sources indicated that there was no plan to hold an incorporeal Cabinet meeting this evening.

A total of 364 new cases of Covid-19 were reported in the State on Sunday, with no new deaths related to the condition.

The total of Covid-19 related deaths in the Republic of Ireland remains at 1,810, and the total of confirmed cases stands at 38,032.

Of the cases notified today, 195 are in men and 168 are in women, 74 per cent are in persons under 45 years, 27 per cent are confirmed to be associated with outbreaks or are close contacts of a confirmed case, and 42 cases have been identified as due to community transmission.

Covid-19 admissions to hospital and intensive care have remained relatively stable in recent days, as the number of new cases increased substantially.

Twenty-two virus patients were in ICU this morning, the same as the previous Wednesday. Hospitalised patients increased from 122 to 134 over the period.

NPHET met at short notice on Sunday amid mounting concern over the rising levels of Covid-19 diagnosis.

HSE figures show there were a total of 132 confirmed cases of Covid-19 in hospital at 8pm on Saturday evening, an increase from 114 on Thursday. Statistics on Friday’s total were not immediately available on the HSE’s website.

There are 20 patients in intensive care.

Asked earlier whether level four restrictions would be imposed in some parts of the country, Green Party leader and Minister for Transport Eamon Ryan said: “I hope we can avoid that. I think we’re going to have to do everything to avoid that.

Asked whether the Government was considering a “circuit breaker” lockdown, which is being eyed by the devolved government in Stormont, Mr Ryan said: “We haven’t discussed it here yet. We put in those five levels and that’s the approach we’re going to take.

“The Government hasn’t been looking at circuit breakers or getting away from that approach,” he said.

Speaking earlier on Sunday, Minister for Public Expenditure and Reform Michael McGrath said he was concerned by the growth in the virus in recent weeks.

“The numbers are deeply concerning and the current trend we are witnessing is not sustainable,” he told RTÉ Radio’s This Week programme.

The figures also show there have been 301 cases of Covid-19 among healthcare workers in the past fortnight, almost 6 per cent of all cases.

Dublin has the highest cumulative incidence of Covid-19 since the start of the pandemic, having surpassed the figure for Cavan again in recent days. Kerry has had the fewest cases relative to population.

Three of the four countries on Ireland’s “green list” now have incidences of the virus higher than the threshold of 25 per 100,000 people, according to the latest figures from the European Centre for Disease Control.

Cyprus, Liechtenstein and Latvia’s figures are above the limit for inclusion on the green list of countries for which no self-restriction requirement exists for incoming travellers. On the basis of current figures, only Finland would qualify for inclusion on the list when it is updated next Thursday.