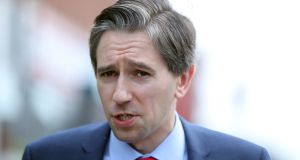 The National Public Health Emergency Team (NPHET) is progressing plans for a new long-term framework for how Ireland lives with Covid-19, which will feature different colour coded levels of alert – red, orange, yellow and blue.

Under the proposals, a red alert means a full national lockdown, an orange alert means higher levels of infection and potential regional lockdowns, and yellow alerts will mean the risk is lower, sources have indicated. A blue alert would show the disease has been suppressed.

“What the Minister for Health is talking about now is trying to put in place a traffic light system where you would have different colours that would indicate how the country is doing today. He will bring proposals to Cabinet in that regard,” Mr Harris said.

However, Tánaiste Leo Varadkar has cautioned that the colour-coded system was still being worked on.

Asked about the new system on Wednesday, he said: “We are now developing a new plan by which we can live with the virus for the next couple of months and respond to clusters and outbreaks as they can occur.

“But at this stage it’s just [ Nphet] and different Government departments and bodies that are putting into that. There’s no draft document as yet and I’d prefer to have that agreed by Government before telling people what’s in it.”

He said the aim at present is to flatten the curve and “reduce the virus to such a low level that we don’t see millions of people getting infected and we don’t get into a situation whereby our health services and our hospitals and our ICUs are overwhelmed, as we have seen happening in some countries.”

He added: “Really the strategy is to slow and minimise the virus to get as close to zero as we can in terms of cases but recognising that that is not possible ... minimise the number of infections, minimise the risk of our health service being overwhelmed which we’ve done successfully until such a time until we develop either herd immunity, which would take an extremely long time, if we continue like this, but more likely development of a vaccine which can provide a degree of herd immunity or an effective treatment of the virus itself, and nobody can predict for sure how long that’s going to take.”

Mr Harris also called for testing for the disease to be ramped up after his successor as Minister for Health, Stephen Donnelly was forced to defend the system.

Mr Donnelly said work was being done to make testing “quicker and quicker”. He added that “one or two issues” had been identified where testing and tracing operations had been scaled back because “we were down to 20 positive tests”.

He acknowledged that clinical calls for those who had tested positive were not being processed “as quickly as we’d like” and there had been a “two to three day delay”.

Mr Harris also said he was concerned so much time was spent debating the reopening of pubs, the existence of a green list and other issues at a time “when we have to do more than one thing at a time.” He also said “an honest conversation” needed to be had about what the future in Ireland looks like as we try to live alongside Covid-19.