Covid-19 deaths in North increase by 30 over weekend 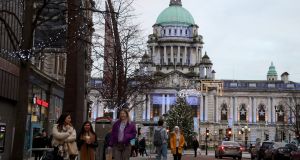 Northern Ireland: Flights between the Republic of Ireland and Great Britain have been banned for at least 48 hours from midnight on Sunday because of concern over the new strain of Covid. Photograph: Pacemaker Press

The North’s Department of Health reported the deaths of 30 more people with coronavirus over the weekend, with 17 fatalities announced on Saturday and 13 on Sunday.

The total number of deaths recorded by the department is now 1,196 and a further 505 people tested positive for the virus on Sunday.

The North’s Ministers were due to meet on Sunday night to discuss concerns over the “aggressive new strain” of Covid-19 responsible for a sharp rise in cases in England.

The emergency meeting had been scheduled for 9pm following requests by Ministers from Sinn Féin, SDLP, Alliance and the Ulster Unionist Party.

The Ministers are also expected to consider arrangements for the Christmas period.

The rules currently in force permit up to three households to meet indoors between December 23rd and 27th, with Northern Ireland entering a strict, six-week lockdown from midnight on Christmas Day.

In a joint letter to the North’s First and Deputy First Ministers from Minister for Finance Conor Murphy, Minister for Justice Naomi Long and the Minister for Infrastructure Nichola Mallon on Sunday – which has been seen by The Irish Times – the Ministers said they shared public concern over the new variant of the virus identified in England.

“The speed and scale of the virus transmission spread and the fact that it is so fast-moving is a cause for alarm to us all,” they wrote.

“While our Executive met last Thursday and moved to take decisions ahead of others, it would be prudent for the full Executive to be briefed by the Minister of Health and the chief medical officer and chief scientific officer at the earliest opportunity.

“We must satisfy ourselves that our regulations and restrictions over the Christmas period and those agreed over the coming six-week period are sufficiently robust enough to safeguard public health in the context of these latest developments,” the letter said.

Dr Gerry Waldron, the head of health protection at the Public Health Agency in Northern Ireland, told the BBC it would be “absolutely astonishing” if the new strain of coronavirus was not present in the North.

“There are no restrictions between travelling between Great Britain and Northern Ireland,” he said. “We will get cases here, there’s no doubt about it.”

Flights between the Republic of Ireland and Great Britain have been banned for at least 48 hours from midnight on Sunday because of concern over the new strain of Covid. The Irish Government said there would be “close co-operation” with the authorities in the North.

In London and the southeast of England, plans to relax the rules on indoor gatherings at Christmas have been cancelled, with travel banned and the region put under strict lockdown in a bid to halt the spiralling increase in cases.

In the rest of England, as well as Scotland and Wales, the five-day Christmas relaxation period has been cut to just Christmas Day, and Scotland has banned travel to the rest of the UK.

A statement issued by the Executive office late on Saturday urged people in the North to limit Christmas gatherings to December 25th only.