Covid-19 cases on the rise due to behaviour change, GPs say

Shutting hospitality before Christmas would be ‘disastrous’, says restaurants association

Tánaiste Leo Varadkar has warned that 2,000 people per day could be testing positive for Covid-19 by the end of December should current infection trajectories go unchecked. Video: RTÉ 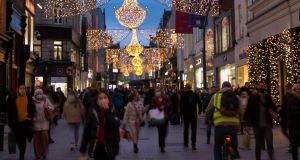 Ireland is in its current position of rising Covid-19 cases due to a change in people’s behaviour, according to Dr Mary Favier, adviser on Covid-19 to the Irish College of General Practitioners (ICGP).

Sweeping recommendations on Covid-19 restrictions are being considered by Cabinet on Tuesday.

The moves follow a dramatic change of mood in Government in recent days and come in response to a surge in infections and warnings from public health experts that case numbers will rise further this week and that we are in the throes of a third wave .

Speaking on RTÉ’s Morning Ireland, Dr Favier said she understood that people wanted to meet friends and family. “People are really struggling and feeling low, lonely and homesick,” she said.

“Unfortunately it has put us into trouble again,” said Dr Favier. She said restrictions will only work if we, as individuals, take responsibility for what we do.

“Nphet [the National Public Health Emergency Team] can advise, the Government can make decisions, but what will make a difference is how many people I meet today. How many people you meet today.”

Dr Favier warned that there would be an increased need for ICU beds in three weeks time, with the “third wave” hitting before the end of December.

Asked about post-Christmas sales, she said they would pose a serious problem, and “maybe this is the year when you don’t need so many new things.”

Among the recommendations being considered by Government is the closure of pubs and restaurants on Christmas Eve.

The Restaurants Association of Ireland is calling for the immediate establishment of a hospitality taskforce, as well as “targeted” financial packages for the country’s restaurant businesses and workers if they are asked to close on Thursday.

A decision to close 20,000 restaurant businesses before Christmas would be “disastrous, devastating, and a crushing blow” to restaurant owners and their staff, according to the association’s chief executive, Adrian Cummins.

“The short notice given will mean thousands of euros of stock per premises [will be] lost in wastage,” said Mr Cummins.

The association is urging the Government to establish a hospitality taskforce with representatives from all the sector’s trade bodies, as well as the relevant Government departments.

The association is also calling for a financial aid package for the sector, which has been “economically flattened” over the past nine months. This package must be “targeted, impactful, and substantial” to sustain the State’s 180,000 restaurant and hospitality workers and 20,000 businesses, said Mr Cummins.

Meanwhile, the owner of a gastro pub has said that his sector has been scapegoated under Covid restrictions.

Dermot McDonnell, of the Cross Guns Gastro Pub in Navan, Co Meath told Morning Ireland that closing down his business again was “a very hard pill to swallow” and that it would have knock-on effects for local suppliers.

Mr McDonnell said he was resigned to the fact that his business will close under new restrictions set to be announced today, but it had already been an extremely tough year.

While he accepted that socialisation led to the spread of virus, hospitality businesses had gone out of their way to exercise social distancing, to train staff and to keep customers safe.

“Gastro pubs have been scapegoated when really it is people’s behaviour in general that is the problem.”

His staff had been rostered, his fridges were full of fresh produce and he was now going to have to phone customers to cancel their bookings.

“We know we will have to close, but we don’t know when we will open again.”

Aside from hospitality, the advice from the Cabinet subcommittee will be that businesses, such as hairdressers, manicurists, cinemas and galleries, should also close before Christmas. However non-essential retail is to remain open with strict guidelines on the numbers in store.

Sources said that no final decision had been made on household visits, while Cabinet will also discuss intercounty travel. The Government is examining plans to allow people travel back to their county of residence after the 26th, but curtailing other travel elsewhere. A Government source said what would be recommended would be closer to Level 5 than Level 3.