Claims that policing of demonstrations was discriminatory were justified, report finds 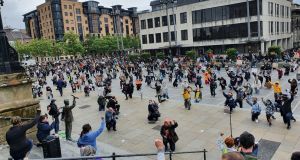 Claims that police handling of Black Lives Matter protests in Belfast and Derry was unfair and discriminatory were justified, the Police Ombudsman for Northern Ireland Marie Anderson has found.

However Mrs Anderson said it was her view that this unfairness was not intentional, and was not based on the race or ethnicity of those who attended the protests.

“Rather [the] PSNI [Police Service of Northern Ireland] failed to balance human rights with the public considerations and requirements of the [coronavirus] regulations.”

This “severely damaged” confidence in policing among some within the black, Asian and minority ethnic communities in Northern Ireland, she said, and made establishing meaningful engagement with these communities more challenging.

The Chief Constable, Simon Byrne, apologised, saying it was clear “that some members of the black and minority ethnic community have been frustrated, angry and upset by our policing response and our relationship with them has suffered.”

He said: “For that I am sorry, and I am determined in that regard to put things right.”

The PSNI, he said, would “seek to embrace the lessons learned and carefully consider [the ombudsman’s] specific recommendations about policy, practice and procedural fairness.”

The ombudsman’s conclusions are among the findings of a report, published on Tuesday morning, following an investigation by Mrs Anderson’s office into the policing of a number of large public protests in May and June.

The ombudsman investigated five Black Lives Matter protests in Belfast and Derry and one Protect our Monuments protest in Belfast. The protests were held between May 29th and June 13th, when there were restrictions in place limiting public gatherings in order to prevent the spread of coronavirus.

She found there were a number of differences in how police handled the two types of protest, saying that police had encouraged demonstrators to gather in a Covid-19 compliant manner for the Protect our Monuments demonstration but had attempted to persuade organisers of the previous Black Lives Matter protests to cancel their events.

Her investigation established that enforcement action – though the issuing of fixed-penalty notices and follow-up investigations – was taken against Black Lives Matter organisers and protestors at two protests on June 6th, but there was no such action in respect of the Protect our Monuments protest on June 13th.

She recommended that the PSNI “review the enforcement notices issued on June 6th 2020, acknowledge errors and commit to redress those individuals affected.”

However she also said “police officers at all three events were respectful, professional and courteous and had not engaged in harassment, as some people had claimed.”

The ombudsman also made a number of other recommendations, including that the police consider adopting a human rights-based approach to the policing of protests.

It was her view, she said, that “historic PSNI passivity in establishing strategic relationships with black, Asian and minority ethnic groups in Northern Ireland manifested itself in an inability to engage effectively with sections of those communities at a time of crisis immediately before and after the Black Lives Matter protests on June 6th, 2020.

“However, I commend the commitment of the Chief Constable to addressing this issue,” she said.

The ombudsman also noted that the task of enforcing the coronavirus regulations had largely fallen to the PSNI, “unfairly in my view”, adding that the regulations “make reference to the role of other ‘designated’ officials such as public health officials and local authority officials.”

He said: “From the outset, both personally and as an organisation, we were alive to the widespread revulsion at the events that led to the death of George Floyd in the USA.

“We tried our best to respect the public health requirements of the Northern Ireland Executive to save lives and at the same time deal with public outcry triggered by this awful death.

“We operated within the legal framework available to us at the time, but the ombudsman is clear that whilst unintentional, we got that balance procedurally wrong.”

He said the PSNI would review the report, and would announce its next steps in January. The first, he said, had been to announce a new community relations taskforce and more details would be provided early next year.