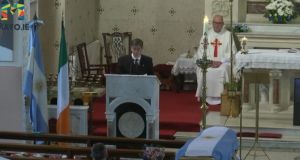 The funeral mass and burial of Argentina’s ambassador to Ireland Laura Bernal who died from Covid-19 has taken place in Foxford, Co Mayo.

In happier times last November Ms Bernal led a large contingent from her country to the town to honour the founder of the Argentine navy Admiral William Brown who was born in Foxford in 1777.

Then 200 officers and cadets from the Argentine training vessel the ARA Libertad marched through the town and Ambassador Bernal laid a wreath at the Brown memorial.

The 64-year-old career diplomat’s return to Foxford was in the saddest of circumstances. On April 27th she succumbed very suddenly to Covid-19 at the ambassador’s residence in Dublin.

At the request of her surviving family in Argentina she was buried in Foxford which was a home-from-home for her during her four years in Ireland.

Her coffin was draped in the blue and white Argentine flag and the same flag and the Irish tricolour were placed at the side of the altar of St Michael’s parish church in Foxford.

Above both flags was a photograph of Ms Bernal’s Argentine compatriot Pope Francis.

The church had a statue of Our Lady of Lujan, the patroness of Argentina, as a reminder of the links between Foxford and Argentina.

Delivering his eulogy on behalf of the people of Foxford and of Mayo, Mayo County Council chief executive Peter Hynes said the funeral service was a “story of connection across the centuries, a story of friendship which spans the ocean and a story of completion, which started here in Foxford in 1777”.

It was a story of three remarkable people, Admiral Brown, the ambassador, JJ O’ Hara, a local businessman who through the Admiral Brown Society had done so much to re-establish the link between Foxford and Argentina, and the ambassador who he described as an “honorary Mayo person and a true friend of Foxford”.

A photograph taken in Co Mayo by local photographer Michael McLoughlin was placed on the altar. It showed a starry night over a bog where turf was laid out in straight rows. Local musicians played an instrumental version of the Coldplay song A Sky Full of Stars.

Mr Hynes said he hoped there would be another star in the skies about Foxford now “and it will be a southern star”.

The homily was given by the Papal Nuncio Archbishop Jude Thaddeus Okolo who is also head of the diplomatic service in Ireland.

Archbishop Okolo said Ms Burnel arrived “like a gentle breeze, unassuming and discreet” into Ireland in 2016.

He described her as a “kind and gentle woman”. The virus had laid its “fatal and cold hands on her and took her away from us. She simply passed away without even knowing she was sick”.

He recalled that the ambassador was the first person to say goodbye to Pope Francis at the end of his visit to Ireland in 2018.

Argentine deputy head of mission in Dublin Diego Sadofschi said Ms Bernal’s last weeks in office were used to repatriate her fellow nationals back to Argentina.

“She had a unique ability to perceive when people were affected. In Laura’s offices we were always comforted. She was an outstanding professional,” he said.

Mr Sadofschi thanked the Admiral Brown Society and the people of Foxford for their friendship with her during her time in office. “I am sure a lifelong friendship and relationship was forged on those days,” he said.

Hundreds of local people lined the route and the funeral cortege paused for a moment at the Admiral Brown statue in the town.

She is survived by her sister Araceli, who lives in Paris, her sister-in-law Luis María and her nieces and nephew María, Clara, Santiago, Victoria and Juan Pablo.

None were able to attend the funeral because of the Covid-19 restrictions, but it was broadcast live on the internet on Mayo County Council’s website.