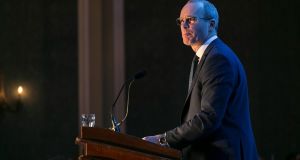 Tánaiste Simon Coveney has said the focus of the Irish government this weekend turns away from what is happening in Westminster to preparing for a no-deal Brexit.

Speaking in Cork the day after Theresa May’s Brexit deal was voted down for a third time, Mr Coveney said:

“I think you will see the Irish government and Ireland as a country moving into a different phase from this weekend.

“And that new phase is to focus more on preparing ourselves for what essentially would be an emergency of an accidental crash-out Brexit which I don’t think anybody wants - certainly nobody here and only a very small minority of people in Westminster are looking for that but it could happen by accident.”

The Tánaiste was opening Jobs Expo 19 at the Clayton Silversprings Hotel in Cork, where he also said he didn’t know how EU leaders would react to a request from Mrs May for an extension to Article 50 and much depended on the conditions surrounding what she might propose.

“I think European leaders will listen to any ask from the UK and their response will depend on what they are proposing but I also think there is a growing impatience across the European Union because the European elections are important for every EU country - this isn’t just about Britain.

“When you have a country the size of the UK being involved in European elections when they are probably not going to be a member of the union in the future, that, I think, is going to be a problem for a lot of countries - having said that, I think any ask will be looked on in a way that is open to solutions.”

He said Ireland would favour an extension of the Article 50 for the UK to try and avoid an accidental crash out but he expected talks between Taoiseach Leo Varadkar and French president Emmanuel Macron in Paris and Chancellor Angela Merkel in Dublin next week to focus on protecting the single market.

“I think a lot of the discussion in Paris and Dublin will be planning for a no-deal Brexit to ensure we all understand how EU countries need to support each other, how we can collectively protect the integrity of the single market while at the same time ensuring we don’t undermine a peace process on this island.

“We have always said this would be a difficult challenge if the UK doesn’t follow through on their commitment to Ireland and the EU that go back as far as December 2017 to actually deal with the border question on the basis of regulatory alignment.

“If the UK doesn’t follow through on that commitment, the EU and Ireland have to find a way unilaterally of protecting the single market while at the same time trying to prevent a physical border infrastructure and protecting an all island functioning economy in those circumstances will be difficult.

“I’ve always maintained that a no deal Brexit is unlikely but it has become a real possibility now in a way that perhaps hasn’t been the case until now and yes, we will continue to work to finding a deal or a longer extension but we also have to factor in the possibility of an accidental no deal Brexit.”