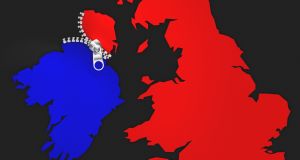 If the UK comes back to the table after a no deal seeking talks with the EU, a backstop-type arrangement in future will be straight back on the agenda. Illustration: Getty

The United Kingdom was meant to have left the European Union at 11pm last night. Now you can take your pick on Brexit day. April 12th. Later in April or early May. May 22nd. The end of the year. Some time in 2020. Another date of your choosing. Never. As this all develops over the next 10 days, there are tricky times ahead for the Irish Government.

It will do all it can to argue on the EU side that the UK be given space – and ideally a long extension to its exit date. Anything to avoid a no-deal Brexit, which would be the Irish nightmare. And the Government does now seem to accept that if a no-deal Brexit does happen, checks are likely be needed – somewhere – on goods crossing the Border.

The message from Berlin, Paris and Brussels is clear. We have shown huge solidarity with Ireland, we realise the need to retain as seamless a Border as possible, but you need to accept that a fully open Border into the EU market is not an option.

A no-deal exit and the need to address this Border crux may still be avoided. But it will be a close-run thing. The risk after the latest rejection of the withdrawal agreement in the House of Commons is that the UK still feels it can push things along for a while yet, while the EU side is getting increasingly fed up and impatient. An emergency EU summit will be held on April 10th , just before the deadline given to the UK of April 12th to come back with a proposal if it wants a long extension in its leaving date.

If the UK parliament can settle on a way forward through a voting process resuming on Monday – perhaps support for a customs union – than it would still have to accompany this with a vote, finally, for the withdrawal agreement. As Theresa May’s government might find it impossible to support a customs union, then a general election could be in the offing. Again, this would give a clear reason for the EU to grant an extension in the UK’s leaving date. So would a second referendum . But you could see too how it could all run into the sand, given how short time now is. The situation remains fluid, unpredictable and dangerous.

For Ireland, a nervy couple of weeks lie ahead. The worst may yet be avoided, with the House of Commons strongly opposed to a no-deal exit and the EU leaders not wanting to be blamed for pushing things in that direction.

Ireland will argue at EU level for everything possible to be done to avoid a no-deal, but this is largely out of our hands. Angela Merkel and Emmanuel Macron are meeting the Taoiseach next week and will canvass his views. But they will also want to ask us what our plans are for a no deal , particularly in relation to the Border and how we would control goods moving into the EU single market.

There has been tension between Brussels and Dublin on this in recent months, but the Dublin position is now shifting.We have tried to make this the UK’s problem during the talks – and will continue to do so, arguing that the UK should keep to commitments made earlier in the talks even in the event of a no-deal. But Leo Varadkar knows that for the big EU powers, the integrity of the bloc’s single market must be protected. There will have to be checks somewhere if the North leaves the EU trading bloc overnight in a no-deal exit Irish officials are starting to scope out the where and how with the European Commission.

Some way might be found to avoid infrastructure at the Border itself. But Ireland will have to collect EU tariffs on imports from the UK and, vitally, ensure the safety of livestock and food products.

What harm could a few cows moving across the Border, or some milk going one way and butter going the other be to the wider interest ? Perhaps not a lot, in most cases. But it takes just one infected cow to introduce foot-and-mouth disease. And how is the EU market to be protected if the UK starts bringing in products from third countries – hormone-fed beef, chlorine-washed chicken – or whatever, which do not comply to EU standards? And how is smuggling and customs fraud to be detected and stopped, if controls and checks are not at a much higher level than current efforts to stop VAT scams and the like?

Avoiding checks would require some type of backstop-style arrangement where the rules are the same in the North as in the Republic and the EU accepts that goods are checked to a sufficient standard entering the island of Ireland. While the UK has said it would not erect Irish Border checks after a no-deal Brexit, its plans for not doing so don’t look sustainable. They would be a charter for smuggling, would deliver a huge hit to businesses in the North and appear contrary to World Trade Organisation rules.

If the United Kingdom comes back to the table after a no deal seeking talks with the EU, a backstop-type arrangement in future will be straight back on the agenda. How, or when, this might play out is anyone’s guess, but for Ireland this is, at least, now central to the EU playbook for any future negotiations.

A high stakes 10 days loom. If a no-deal exit is to happen, it could occur as early as April 12th, though the EU leaders could – with the UK’s agreement – look to push it forward to any time up to May 22nd. The alternative is a long extension of the UK’s EU membership and time for the UK to think again about what kind of Brexit it wants One outcome moves Brexit to the centre of Ireland’s political and economic agenda. The other would be one heck of a relief, even if it left much talking still ahead. And as the Government of the day always takes the hit when things go wrong, whether they are to blame or not, the stakes for Varadkar could hardly be higher.