Coveney: repeal is necessary so women can get protection they deserve 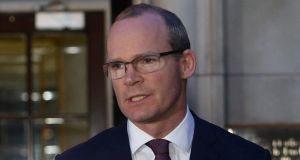 Tánaiste Simon Coveney said people could no longer turn a blind eye to the thousands of women who have been forced to leave Ireland to get the medical interventions that they need. Photograph: EPA

Tánaiste Simon Coveney plans to campaign whole-heartedly to repeal the Eighth Amendment because he believes it is the only way women in Ireland can get the protection they deserve during pregnancy.

Mr Coveney said he saw the abortion issue as a two-step process, comprising firstly repealing the Eighth Amendment and then introducing subsequent legislation.

Mr Coveney has already made his opposition clear to the idea of allowing abortion up to 12 weeks.

The draft heads of the Bill to provide for a referendum on abortion, which are to be considered by the Cabinet tomorrow, will ask voters if they wish to repeal the Eighth Amendment and allow the Oireachtas to provide for the termination of pregnancy in accordance with law.

Ministers will consider the first draft of the Bill tomorrow and a final wording is due to be agreed by March 6th.

Speaking on Monday morning Mr Coveney said “this is a two-step process and Ireland needs to change its constitution in this area because it’s too restrictive in terms of what the State is allowed do.

“If we don’t do that we can’t bring in legislation that we need to bring in to protect women in pregnancy.”

‘We need to change’

“I cannot stand over any longer a situation where somebody is in a crisis pregnancy, a woman whose health is at risk, cannot get the medical interventions that they need in Irish hospitals to end a pregnancy when it needs to happen. We need to change that.

“ I also think, as I’ve said, the State has a responsibility towards protecting an unborn child too but I think we have to prioritise the lives and the health, both physical and mental, of women and so we can’t do anything of that if we don’t change the Constitution.”

Mr Coveney said if the referendum to repeal the Eighth Amendment is passed, it will then be up to the Oireachtas to legislate on the issue and he expected that there will be a full debate starting with the All-Party Oireachtas Committee recommendation to allow abortion up to 12 weeks.

“I, like everybody else, will work in a constructive and progressive way to get the balance of the legislation right but the focus, first and foremost for me, is in encouraging people to vote Yes to change the Constitution so we can protect women in the appropriate way.

“There are just far too many stories, thousands of them, of women who have been forced to leave Ireland to get the medical interventions that they need to protect and support them and I don’t think we can turn a blind eye to that any longer - we need to take that on.”

Asked about Minister for Social Welfare Regina Doherty’s comments that the Government should not be complacent about repealing the Eighth Amendment as she did not think the referendum would currently pass, Mr Coveney said all political parties needed to show leadership on the issue.

He said the proposal to repeal the Eighth Amendment came initially from the Citizens’ Assembly and then the Oireachtas Committee which was supported by every political party in the Dáil so all political parties should show leadership in persuading people to support repeal.

Mr Coveney acknowledged abortion was “a very sensitive and delicate issue” where people held very strong views and while some people were uncomfortable talking about it publically, he, as a public representative, had a duty to make his views known.

He said while he was not surprised by the number of people who were undecided on the issue , he was reassured by weekend opinion polls which showed a majority in favour of repeal and while he expected the debate to become very emotive, he would not be shy when it came to the campaign.

Mr Coveney said as a Tánaiste he needed to speak openly about “what we are doing and why we are doing it and why it is so important and I will be quite vocal during this campaign.”

“Hopefully we will be able to persuade people that this is the right thing to do, that it is the compassionate thing to do and if we don’t take this opportunity then we will be continuing to allow many young women to be exposed to things that they should not be exposed to.”