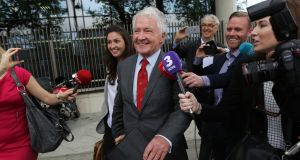 The State’s corporate law watchdog has sought to cast blame beyond its office for the collapse of the criminal trial of former Anglo Irish Bank chairman Seán FitzPatrick.

Ian Drennan, the head of the Office of the Director of Corporate Enforcement, will tell an Oireachtas committee on Tuesday that factors which contributed to the collapse of Mr FitzPatrick’s trial “extend well beyond the failures that occurred within the ODCE”.

Mr FitzPatrick was accused of misleading Anglo’s auditors about the scale of his loans at the bank as the financial crisis erupted.

His first trial collapsed in 2015, weeks after Kevin O’Connell, then legal adviser to the ODCE, admitted shredding a number of relevant files in a “panic.”

The second trial – lasting 126 days, making it one of the longest in the history of the State – ended when Judge John Aylmer directed that Mr FitzPatrick be found not guilty after he criticised the ODCE’s handling of the investigation amid fears that evidence had been tainted.

In his first appearance in front of a parliamentary committee since he was appointed director in 2012, Mr Drennan will speak about the ODCE’s botched investigation that contributed to a judge directing a jury to acquit Mr FitzPatrick after the 2017 retrial.

In his opening statement to the Joint Oireachtas Committee on Business, Enterprise and Innovation, Mr Drennan will say that the ODCE’s five investigations into Anglo were “unprecedented, not merely in terms of the ODCE’s history up to that point but, arguably, in the history of the State”.

“Unfortunately, the risks associated with taking on a suite of investigations of this scale were not sufficiently appreciated at the time, as a consequence of which those risks were not appropriately mitigated,” he says in the statement, submitted to the committee last week ahead of his appearance.

Mr Drennan will say that notwithstanding the failures that occurred during the FitzPatrick investigation, “an enormous level of high-quality investigative work was done over that period – an achievement that, unfortunately, came at a considerable human cost”.

He will say that Judge Aylmer cited the ODCE’s most fundamental error as being the manner in which it took witness statements from two audit partners at Ernst & Young (now EY), Anglo’s auditors.

He points out to the committee that about 60 statements were taken from other witnesses during the investigation, none of which attracted any criticism from the judge or Mr FitzPatrick’s defence team.

Mr Drennan will say that “valuable lessons” have been learned from the episode. He will say after the collapsed retrial the ODCE and the office of the Director of Public Prosecution conducted a “joint look-back” to discuss and learn from issues that arose from the investigation and prosecution.

Since then, he says in the statement, all criminal investigations at the ODCE are led by An Garda Síochána staff working for the director, while the taking of witness statements is “always led by gardaí”.

Mr O’Connell wrote privately to the committee last week saying that he had new information about the botched investigation that was never aired at trial and has said he would share this previously unheard information with the politicians and ask for a public hearing.

He complained in his 10-page letter that he has become “the personification” of all that went wrong with the investigation and prosecution and suggested that he is not wholly to blame.

The chairwoman of the committee has sought legal advice on whether Mr O’Connell should be allowed to give evidence.

1 How one couple’s weekend away resulted in 30 Covid-19 cases
2 Taoiseach tells TD to ‘cop on’ over criticism of contact tracers asking about pubs
3 Miriam Lord: Government’s latest comedy of errors offers little to laugh about
4 Colleges may have to create 1,000 extra places after Leaving Cert errors
5 Trump urges Proud Boys to ‘stand down’ after debate criticism
Real news has value SUBSCRIBE