Barber hopes to emerge a cut above in Roscommon council election 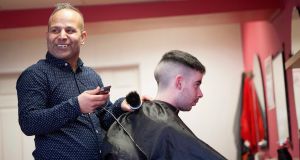 A Ballaghaderreen businessman has announced he will contest the local elections in May. So far, so unremarkable, but Sajjad Hussain’s decision has generated some interest as he is hoping to become the first Asian person to win a seat on Roscommon County Council.

His foray into politics has been a topic of conversation in the barber shop he runs on the town’s Main Street with visitors discussing the pros and cons with Pakistan-born Hussain, who has lived in Ireland for 18 years and Ballaghaderreen for 13.

“I see you’re getting into politics,” said one customer who was getting a trim in advance of a 60th birthday party.

“What do you think?” asked Hussain, who is eager to hear all views despite knowing this man is from Loughglynn, outside his electoral area.

Two students getting spruced up in advance of Galway Rag Week were more encouraging.

One friend worried that the barber might experience 'negativity' because of his race, something Hussain says he rarely encounters

It’s a sentiment repeatedly shared by many posting on the aspiring politician’s Facebook page.

Hussain (42) is best known outside Ballaghaderreen for his work with the Syrian community, who arrived at the local emergency reception and orientation centre (EROC) in 2017.

He was one of four people from the town nominated to accept the Rehab community People of the Year award last year in recognition of the town’s response to the arrival of the people from Syria.

He also heads up a Tidy Towns committee, works with youth organisation Foróige and founded the local cricket club.

Hussain does not accept that his potential support base is concentrated in the immigrant community, noting that “95 per cent of my customers are Irish”.

The Pakistani community in the area is well established but he estimates that it extends to only about 300 people, including children. Ballaghadereen is in the Boyle electoral area and those who won the six available council seats in 2014 pulled in between 840 and 1,500 first preferences.

Hussain declared his intention to contest the election after discussions with 50 to 60 people. He says only one of them gave him no chance of winning a seat, suggesting that there was “no point”.

Hussain has identified rural regeneration and better use of available housing as campaign issues.

“In Ballaghaderreen half the shops on the main streets are closed. I know the people who have had to leave. I would say 100 of my customers have emigrated. People are saying the recession is over but it’s not over here,” he says.

“There are 100 houses empty in Ballaghaderreen. They are privately owned and I do not know the reasons, but people are struggling to find houses to rent and many are empty.”

His main rival for votes in Ballaghaderreen, which has a population of 2,500, is sitting Sinn Féin councillor Michael Mulligan, who runs a shop a stone’s throw from Hussain’s.

One friend worried that the barber might experience “negativity” because of his race, something Hussain says he rarely encounters.

“I am a human being. But it is only a tiny tiny few. I do not waste my time on them. Most of the negativity is online,” he said.

“I have paid taxes here for 18 years. I have two people working in the shop. I get a lot of love from Irish people. Now I really think that I can win.”