Higher Education Authority reports 90% of graduates get jobs in Ireland 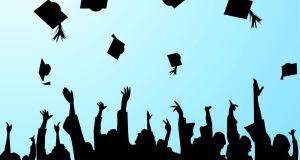 Nine months after graduating, those whose studied education and teaching have the highest reported average salaries, at €38,701.

Young teachers earn most within months of leaving college while arts graduates take in the least, a survey of more than 29,000 recent third-level graduates has found.

However, these graduates had among the highest percentages going on to do further study (24 per cent).

Overall, the Higher Education Authority report shows that nine months after graduating the vast majority of graduates (78 per cent) were working.

The strength of the growing economy is reflected in the fact that 90 per cent of those who graduated found employment within Ireland.

Paul O’Toole, chief executive of the Higher Education Authority, said it is clear there is a demand in Ireland for high-quality graduates coming out from our higher education institutions.

Mean starting salary for graduates working full time was €33,574, with most honours-degree graduates on a salary somewhere between €20,000 and €35,000.